Mary Harvey is the owner of Urban Princess Boutique located just off of South Street. After years of working local fashion house parties, she decided to not only open her own boutique but also become a member of the South Street Headhouse District. From there, she became a key member of the community and one of many boutique owners who thrive from sharing their love for fashion. 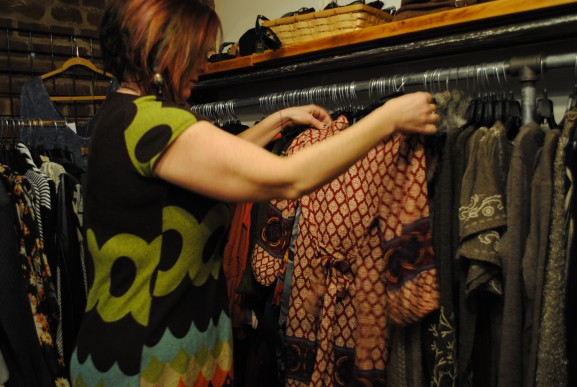 What is your role as a member of the South Street Headhouse District and how does it relate to fashion in Philadelphia?

I feel like just a little bit of a cheerleader at the South Street Headhouse District. I stay really involved but I’m not really an official member of the board. There’s a lot of businesses that just aren’t able to make all of the meetings. I kind of play cheerleader and check in with everybody, see what’s going on and try to keep a cohesive connection. Then, just being a business owner down there, we all really work together to promote each other. So, I stay involved and keep letting our customers know what’s going on in the district because right now there’s so much growth.

Why did you decide to take a role in South Street Headhouse District Fashion?

I took on a representative role because there are so many businesses in the district that don’t have time to be at all the meetings. It is important that we have a place to go once a month to hear what’s going on. I go as much as I can to share with the people who can’t go. Also we do a lot of events/co-promotions together, and I got involved to help the shopping district  work together. We do something called 4th Street Fashionista and the winner gets a shopping spree down the whole street. So the winner will get $1,000 worth of new clothes, shoes and hair. I contribute to those events to keep excitement in the area and keep people having fun. 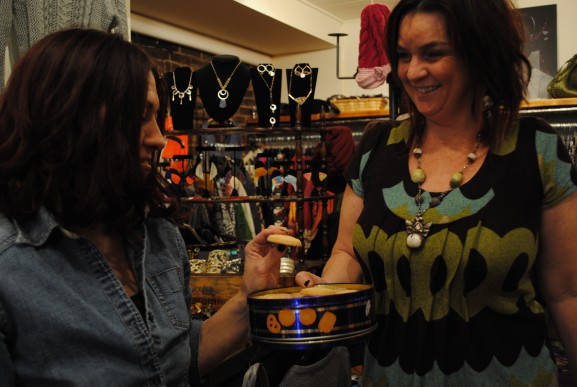 What influenced you to open your own boutique?

I had a business called Rock & Roll Clothing which was a private house party. I went all over and bought stuff from shops that I loved and kept some and then sold the rest at the house parties. To market my business I would do things like craft sales and festivals. I met other girls who did that and we decided that we needed somewhere to put our stuff when we weren’t at all these shows. So, we started off using the current boutique space as a warehouse. Our warehouse turned into a boutique because there was a real need for that in the area. I would get girls who called me and say, ‘I need a dress for tonight,’ and I’m like, ‘Are you kidding me? You want me to unpack everything to see if maybe you can find something?’ Now at the boutique, my clothes are available and very inexpensive for what they are.

You can find plenty of statement dresses in there between $25 and $50. At first I wanted a place where my clothes could be set up warehouse style, for when I needed to do shows. Now that the neighborhood is blossoming and there’s so much traffic, the warehouse flourished into a boutique.

What do you believe is your biggest achievement since you have taken on a role in South Street HeadHouse District Fashion?

Really just becoming a part of the neighborhood. It’s just so fun to be in a place where dads take their little girls when they need an outing to do that’s free. The girls just come and chill in the store and they’re surreal for like an hour. They get a free cookie and they look at little bows. There’s always something inexpensive for them to have. Really it’s just making people happy and having fun. I think that’s our biggest achievement. Community building.

What is your definition of fashion?

Self-expression. Just having fun. I’m a hippie. I’m like a fun, chill, doesn’t-take-me-long-to-get-ready kind of person so, I’m always in comfortable and flowy things. You can tell who I am by what I wear. I don’t follow and rules and I’m not very trendy. I’m never necessarily on “trend” because that’s just not who I am. So that’s my self-expression. Other people stay on top of trends and that’s cool. That shows their personality. So, I would say the definition of fashion is self-expression. 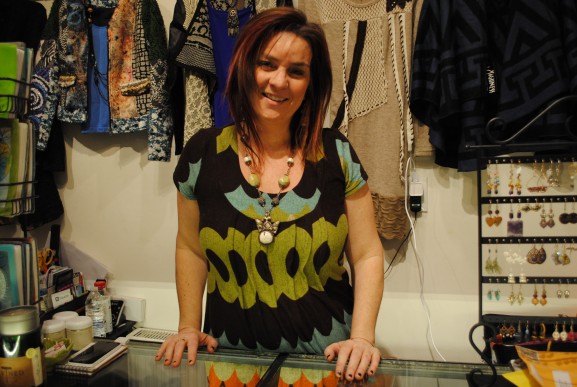 How does fashion affect the South Street community?

I think it shows the diversity of the city. You can go down the South Street and you can get anything. You can get rocker clothes from Crash! Bang! Boom! You can get locally made from Urban Princess. You can get crazy imported shoes that aren’t your everyday shoes. You’ve got something for every personality.

How does Urban Princess Boutique contribute to the diversity of South Street Headhouse District fashion?

Well we feature over 70 different local artists. I outfitted three generations of different people and all differently. So I think just the diversity of who we’re representing in the store and the 70 different personalities that create what we sell contribute. Also, we’re very different from everybody else who’s out there. Every store has its own personality. Everybody on South Street are local business owners who sell what they want and promote what they want. Nobody’s fitting into specific molds. I shop from local artists for my boutique. I also go all over the world looking for stuff that is fun, funky and affordable. I search around and go wow that’s unique, that’s different, that’s timeless, that’s what people are going to love and I get it.

– Text and images by Rasmiyyah A Hargust and Alexis Byrd.

Philadelphia is full of people with different fashion styles and inspirations. Walking through the city you can find styles that represent the Thrifty Fashionista, the Not-So-Basic Dresser, the Statement Maker, the Grungy Rocker and the [Read More]

The name Palmieri means something to denim enthusiasts in Philadelphia. The embroidery-stitched jeans are a signature mark of custom tailor, Joseph Palmieri whose “wear the difference” motto is making more than just a fashion statement. [Read More]