A small crowd began to gather just after noon under an Interstate 95 overpass at the corner of Front and Tasker streets. People of different races and ages started to form a line. Some had children or other family members with them, some came alone. Most held empty bags protectively close to themselves, which soon would be filled with fruits and vegetables. 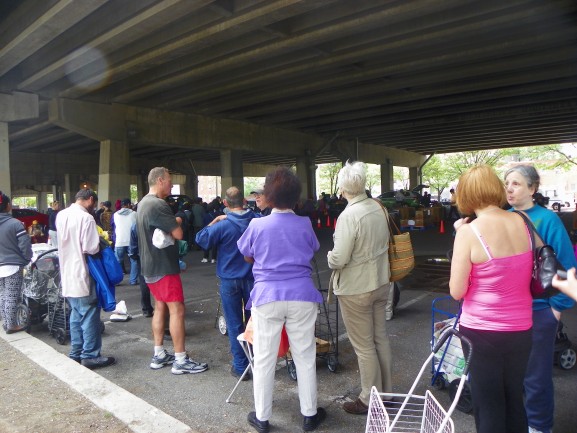 Fresh for All is a food distribution event that takes place every Friday from 1:30 p.m. to 2:30 p.m. The purpose is to get fresh produce to those who need it. This event is one of many ways that Philabundance helps relieve hunger in the community.

In 1984, Pamela Rainey Lawler founded the organization, whose mission is to reduce hunger and food insecurity in the Delaware Valley by providing food access to people in need, according to the Philabundance website.

Lawler saw the need for an organization like Philabundance when she noticed that there were people not getting enough to eat in the Philadelphia area, but also saw that there was no shortage of food. The issue lay in the fact that food was getting wasted and not going to the people who really needed it.

This year Lawler was awarded the Pearl S. Buck International Woman of the Year Award. This award honors women who have distinguished themselves in their careers, devotion to family and humanitarian goals. Lawler joined a distinguished group of 31 honorees including Audrey Hepburn.

Philabundance integrated with the Greater Philadelphia Food Bank in 2005 to become the region’s largest hunger relief organization. Philabundance utilizes their contacts to connect with those working in the food industry, manufacturers and importers, farms and local communities.

The communities are connected to Philabundance through a network of approximately 400 member agencies, including food cupboards, churches, shelters, social service agencies and emergency kitchens. When these agencies are in need, Philabundance is there to provide them with all types of food sources.

Philabundance serves as a middleman and provides food to approximately 75,000 people per week throughout nine counties – Bucks, Chester, Delaware, Montgomery and Philadelphia counties in Pennsylvania, as well as Western Burlington, Camden, Gloucester and Salem counties in New Jersey, according to Jaclyn Elwell, the manager of volunteers. 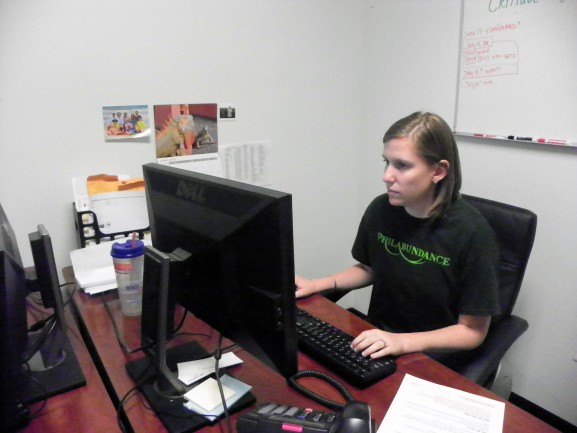 Elwell (pictured above), who has been working with Philabundance for the past two years, said the demographics for people who benefit from Philabundance’s services are extremely varied.

“Hunger doesn’t have one defined look,” said Elwell. “We have the homeless populations, but also people who are underemployed or have medical issues and are not able to provide for themselves or their family when it comes to food.”

Elwell decided to get involved with Philabundance because she felt there was a lot of needs that had to be addressed in her own community of Philadelphia.

“I wanted to give back locally,” said Elwell.

Philabundance has more than 17,000 volunteers, according to Elwell. They do everything from sorting and organizing the food in the coldest part of the warehouse, to making sure the food goes into the hands of the people who would otherwise go without.

Jack Katz, a local Philadelphian and volunteer with Philabundance for the last year, decided to get involved with the organization after he retired.

“It’s just hard to believe that in this country we even need an organization like Philabundance,” said Katz. “There is plenty of food and there are plenty of people who need the food and that is how Philabundance came to be.” 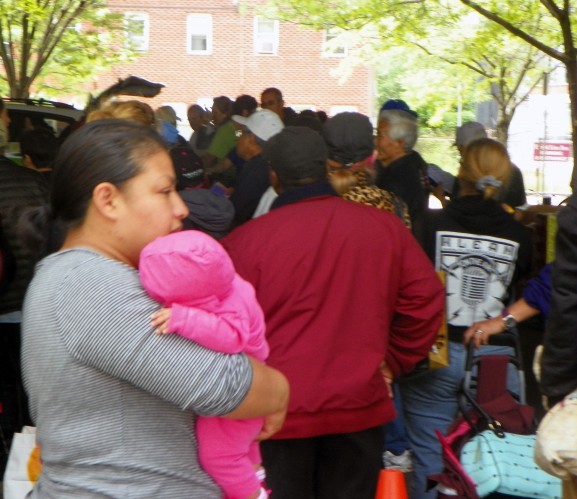 According to the Natural Recourses Defense Council, 40 percent of food goes uneaten in the United States. This comes to 20 pounds of food per person per month.

Barbara Gambale is a local Philadelphia community member who has been coming to Fresh for All for about seven years. Gambale said that the event is a huge help to her.

“With the money that I don’t have to spend on food for me, I am able to feed my six cats,” said Gambale. “They are my babies, I love them.

Jessica Adams, another local Philadelphian, stumbled upon the Fresh for All by what she called serendipity.

“It’s nice to know that there are people paying attention,” said Adams. 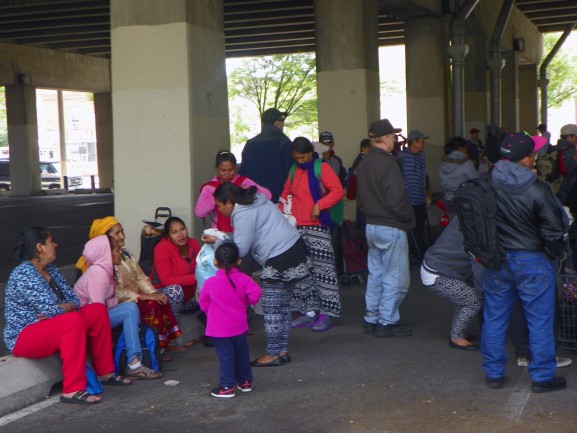 With only a penny to her name, Adams admitted, had she not come across the Fresh for All, she would have gone hungry that day. 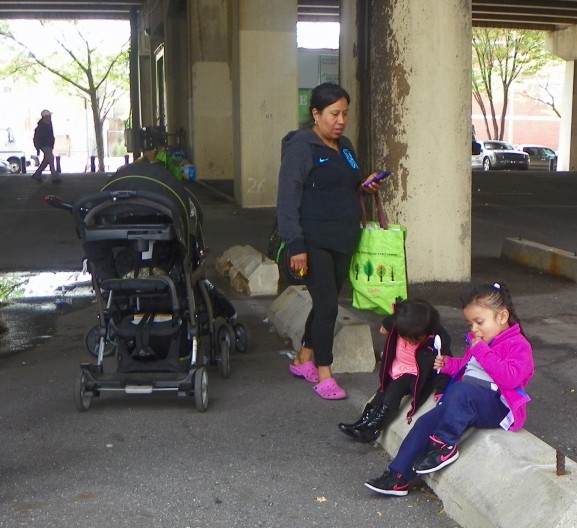 Laurie Sciarrillo, a Philadelphia resident and mother of one, comes to the Fresh for All to help cut down her food bill.

“Fruits and vegetables in general are more expensive,” said Sciarrillo. “[Fresh for All] makes a difference because it helps people eat healthier. I know it’s cheaper to buy a bag of chips than a couple of pieces of fruit.”

Her husband began coming to the event when he was injured and out of work so he could continue to contribute to the household, according to Sciarrillo.

After he went back to work, she took over, and has been coming to the Fresh for All for the past two years.

Philabundance serves as a reminder of what people can do when they get involved. Elwell encourages people to do just that, in whatever issue really resonates with them. Whether it’s hunger, poverty or education, all of these issues and more will never be solved without people giving back to their communities.

– Text, photos and video by Christine Irving and Sarah DeSantis.

Media coverage in Fairhill tends to be of a negative nature, usually focusing on crime. In order to provide a better understanding of this unique and culturally diverse community, here are five things you might not [Read More]