The Cunningham Piano Company donated a digital organ for the Papal services that concluded yesterday with Pope Francis leading a mass on the Benjamin Franklin Parkway.

“I’m a musician, and, of course, I’m a business owner, so this works with all of my passions together,” said Cunningham co-owner Rich Galassini (pictured above).

The Cunningham team sees the donation as a worthwhile investment of their resources, despite not making a profit from it.

“It’s a very exciting opportunity,” said Cunningham Institutional Sales Director Donald McFarland. “It doesn’t matter if you are Roman Catholic or not. It’s a great honor for us.”

McFarland’s job has him visiting churches to find ways to accommodate their desires and musical needs.

“He and his musicians do prefer the Rodgers’ organ,” said Galassini, referring to the Pope. “That’s a brand of an organ that is digital. There are no pipes but it emulates the sound of pipes so well. So, when the Pope was coming to Philadelphia, the Rodgers’ company emailed us and said, ‘He’s coming to Philadelphia. Have you already reached out and set up an organ yet?’ So we did.”

The organ is a Rodgers Infinity Model 361 and weighs more than 1,200 pounds.

The cost of renting the organ is around $2,000. On top that, the Cunningham team moved it to the Convention Center for the World Meeting of Families and then to the Ben Franklin Parkway for the Papal mass. They set up the instrument at both locations and stayed on hand to ensure the best sound.

“We have a team of experts because a digital pipe organ is heavy, awkward and delicate all at once,” said Galassini.

With renting and moving fees, the total cost was around $6,000.

While the motivation to donate the organ for the Papal masses were not in the hopes of financial gain, McFarland sees the donation as having a possibility to boost business in the future. The company has supported a lot of events with the Archdiocese of Philadelphia in the past.

“It’s certainly our hope that other churches in the area would recognize the fact that when there was a need, we did not hesitate to offer our services and our facilities,” said McFarland. “We did not do it with the intention of suddenly selling a bunch of new organs. Rather, we felt that it was important that the Archdiocese of Philadelphia, the World Meeting of Families and those connected with the Papal visit have the very best product available.” 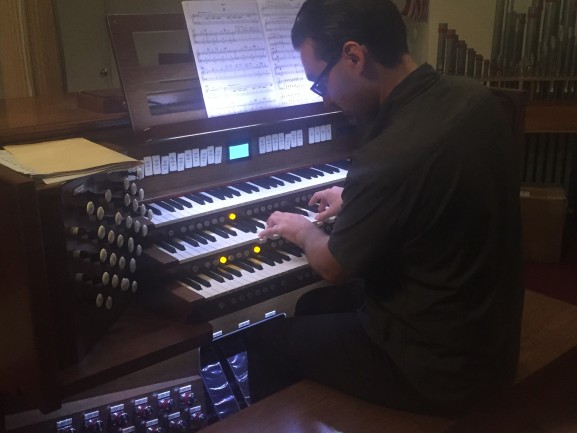 Organist Sandor Kadar (above) was chosen by the Vatican to perform at the ceremonies. For weeks, he practiced on the organ at Cunningham.

Kadar moved to America from Serbia as an exchange student at Westminister Choir College in Princeton. He is the principal organist at St. Andrew Church in Newtown, Bucks County.

“It’s a once in a lifetime opportunity,” said Kadar. “It’s the music making that is important. I enjoy the rehearsals. Great acoustics, great people.”

–Text and images by Rose Daraz and Nikki Svec.

In January 2014, President Barack Obama revealed the first five locations that will be designated as Promise Zones. The initiative, designed to provide vital investments to dilapidated areas, includes the Mantua neighborhood of Philadelphia. The Promise Zones are [Read More]

Walking down Germantown Avenue in Chestnut Hill, the Pennsylvania General Store fits comfortably alongside the local boutiques, restaurants and coffee shops. Just six months ago, the store owned by Michael Holahan and his wife only [Read More]