John Paul II had come to a city where 1 million people had attended his open-air Mass, at the Cathedral-Basilica of Saints Peter and Paul, in Logan Circle

Todt remembered John Paul II’s alter and platform. But he didn’t remember the heightened attention given to high school athletics.

“I remember, back then, we had to cancel games that weekend,” Todt said. “But we didn’t have the World Meeting of Families happening. That has complicated this thing to the extreme. It was a special event back then. I remember our priest being so excited to be a part of it. But it didn’t affect sports as it has now.” 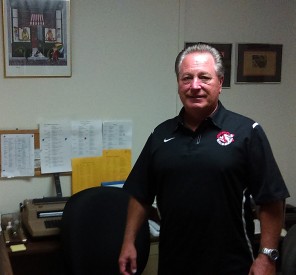 Todt (pictured right) started working for Ryan 43 years ago. He spent the majority of his career teaching advanced French and Pennsylvania history. Todt was also the boys’ soccer coach. He has since retired from those roles, now serving as the school’s athletic director.

This past spring, the Office of Catholic Education announced changes in its academic and athletic schedules. The week before Pope Francis’ arrival, the 17 schools couldn’t practice until 3 p.m. Additionally, students were given off from Wednesday through Monday to attend the World Meeting of Families’ programming.

“We didn’t give them [the student athletes] off so they could come in early and practice,” Todt said. “Many of them wanted to attend to be involved with the World Meeting of Families.”

The ruling, in conjunction with security measures taken by secret service agencies, has recently forced many athletic directors to change their schedule.

“Every school is adjusting, especially their football programs,” said Todt, who’s spoken with other athletic directors about the situation.

Football has been the crux of Ryan’s problems. The school had to reschedule its game against Roman Catholic. The game, originally slated for Friday night in Conshohoken, was moved to Thursday in Bensalem.

The short week forced Ryan’s football team to practice on Monday, a day they would normally study film. Head coach Frank McArdle said his Raiders couldn’t be as physical as usual.

“To me, the situation is what it is, so we have to handle it that way,” McArdle said. “We have to play shorter, so coaches have to do a better job of getting the schemes ready and setting up our meetings. The players just have to lock in faster.”

McArdle, who’s in his sixth year as Ryan’s football coach, was born after John Paul II visited Philadelphia. His uncle, a police officer, was in the bus in front of John Paul II. In 1979, local police were the pope’s sole protectors. This time, the FBI and other agencies were involved in Pope Francis’ protection.

“It’s a much bigger deal this time than it was last time,” McArdle said. “I think part of it is the world we live in now.”

While coaches and players were generally excited for Francis’ visit, junior strong side linebacker Pat Jurgelewicz also realized how the situation would effect him.

“It’s going to be rough, like today, because we usually have this day off to just watch film,” Jurgelewicz said. “Now, we have to come out and practice. It’s going to be a tough week, but we just have to focus.”

Ryan’s volleyball and soccer teams were also affected by Pope Francis’ visit. Thursday and Saturday games were cancelled. The Raiders also had a soccer game scheduled for Friday, in Delaware County, against Springfield Chestnut Hill Academy. That time slot remained because Ryan hoped to get its team back to the Northeast by 7 p.m., before roads closed at 10 p.m.

“The reality is that we had to adapt and change, depending on the school’s location,” Todt said. “Everything inner city and further has been impacted through the closure of streets, closure of highways. And I don’t think anybody really knows what the impact might be, Saturday into Sunday, even Friday night, when they start shutting down roads.”

Roman Catholic’s athletic director Dan DiBerardinis was also annoyed with his constant schedule adjustments. But he was more excited than disappointed about Francis’ visit.

“I think it’s an honor,” DiBerardinis said. “If I wasn’t an athletic director trying to juggle games, I would probably be thrilled about it. I think the pope is doing a very good job. I’m excited, but at the same time, it makes my life a little more hectic, moving games around. But overall, I came from a Catholic school where it was kind of a big deal.”

– Text and Images by Sam Botwinick and Steve Godwin.

With years of boxing experience under his belt, 18-year-old Branden Pizarro is making a name for himself as the youngest professional boxer in Pennsylvania. He’s been featured on Showtime’s ShoBox: The New Generation and now has [continue reading…]

Local Manayunk cop Chuck Taylor grew up riding motorcycles. When he decided to become a police officer, working with motorcycles just made sense. Now that he is one of the head instructors for highway patrol, [continue reading…]