Tucked away in an aging building at Front and Jackson streets in the Whitman section of South Philadelphia, devoid of the typical bells and whistles that accompany haunted attractions, Fright Factory is easy to miss.

But after being featured as one of the “Scariest Haunts in America” by the Travel Channel, the South Philly factory draws a steady crowd – it’s keeping them there that’s the problem.

“Twenty percent of the people who come here quit before they get to the end,” said Fright Factory casting director Dave Ferrier. “I don’t know of any other haunts in the area that boast a ratio like that.”

In 2012, Fox 29 dubbed Fright Factory the scariest haunt in Philly. Ferrier credits their media recognition to the actors. 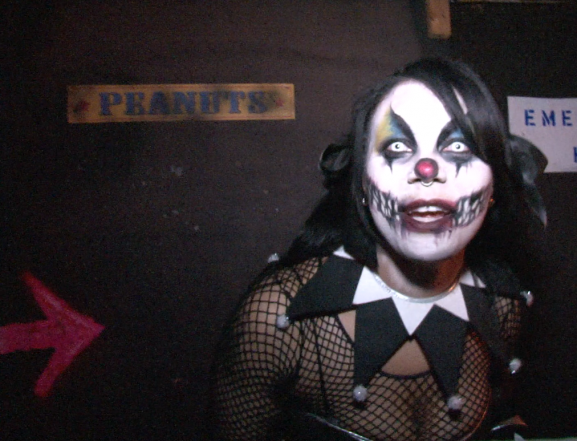 Fright Factory actor Rob Williams said the reaction from patrons is a reason he loves his job. The self-proclaimed Halloween freak has a fan base at the factory.

“There are people that come here every year that know my character and know my name,” Williams said. “They ask for me.”

This season, Williams portrays a zombie custodian. Along with all of the actors and sets in the 25,000 square-foot attraction, Williams underwent a makeover to reflect this year’s consistent factory theme.

“We didn’t have sets that made much sense before,” Ferrier said. “We would have a janitor’s room next to a nursery. We reworked everything this year to return to the factory theme –old rusty pipes, boiler rooms, sewers. Everything you’d expect to find is here.” 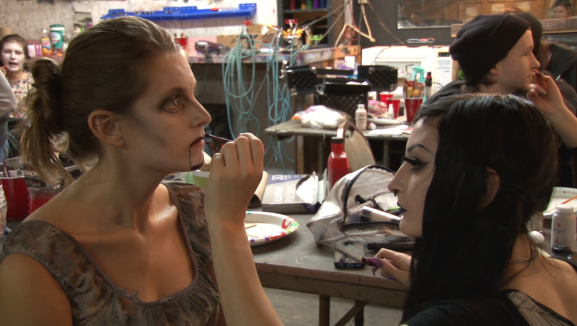 Ferrier and the management team also brought in a slew of new actors and makeup artists including, reality competition show for special effects and make-up artists, “Face Off”‘ season nine contestant Meg Wilbur.

Fright Factory actor and community college freshman Taylor Weisman auditioned after a recommendation from a friend. It’s not her first career choice, but Weisman said she’s happy to be a part of the team.

“I don’t want to get into acting,” Weisman said. “But this is something I really love to do. It’s a great job.”

Ferrier said the media attention is welcome, but he takes his feedback more seriously from the everyday patrons. Ferrier prints out and hangs comments from Yelp around the factory’s dressing room as a reminder to his actors of the goal: scare people and have fun.

“It is a lot of long hours, lost voices and bruised bodies that go into putting on a production like Fright Factory,” Ferrier said. “Last weekend we watched a group of three ladies literally tumble [out] at the end, totally out of breath and sweating. They were grateful the ordeal was over, but you could also tell they had an awesome time.  That is truly the best recognition we could ask for.”