Children gathered their backpacks and lunches as they got ready to leave the Cecil B. Moore Recreation Center. The recreation center, located near the corner of 22nd Street and Sedgley Avenue, provides children with a safe learning environment where they can take part in various activities.

C.B. Moore, a three-floor facility, sits on 6.2 acres of land and has a ballfield, pool, sports field, volleyball court, two basketball courts and two tennis courts. It offers an after school program, martial arts, an exercise group for adults, theater arts, cooking class and arts and crafts. The activities are offered during certain days of the week and are open to all children in the community.

The entrance to the recreation center is a simple brown door which leads to a small foyer. The auditorium, where theater arts takes place, is to the left of the entrance. To the right, at the end of the hall, is the basketball court. Murals and bulletin boards line the hallways with handmade decorations. At the midway of the hall is the main area with two vending machines adjacent to the bathrooms. An old-looking staircase winds to the third floor which holds the kitchen and computer lab. The basement is where children learn martial arts three times a week.

LeShadae Godfrey, Direct Leader One, is in charge of creating programs for the community. Godfrey has been at C.B. Moore for two years and helps the children with a variety of activities.

“I like to see that they like to be involved and hands on,” Godfrey said. “As long as you have something for them to do they’re willing to participate so I think that is our strongest point as far as keeping them from the perils of crime.”

Strawberry Mansion is an area known for its crime. According to the Philadelphia Police Department, in the past month there was a total of 70 crimes including two homicides, two rapes, five robberies, 17 aggravated assaults, 17 burglaries and 27 thefts.

Nearby public schools such as Strawberry Mansion High School aren’t much better. During the 2014-2015 school year there were over 60 serious incidents at the high school including vandalism, sexual misconduct, weapons confiscated, fire from incendiary devices and assaults on students, teachers and school police.

Strawberry Mansion High School’s 2013-2014 progress report also has them ranked in the bottom tier of every major category such as achievement, progress and their overall score. This means on a scale from 0-100 percent, Strawberry Mansion High School is between 0-24 percent in every major category, a failing grade. They rank 68 out of 71 high schools in Philadelphia and have a 57 percent graduation rate compared to the overall Philadelphia City School District graduation rate of 70 percent. 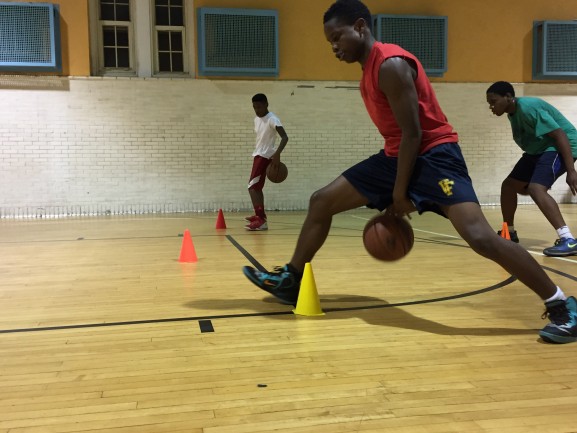 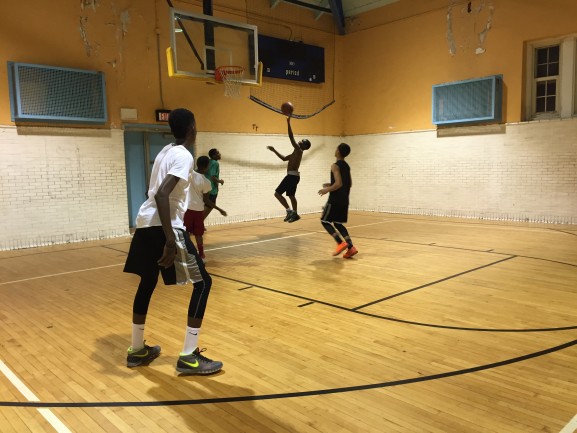 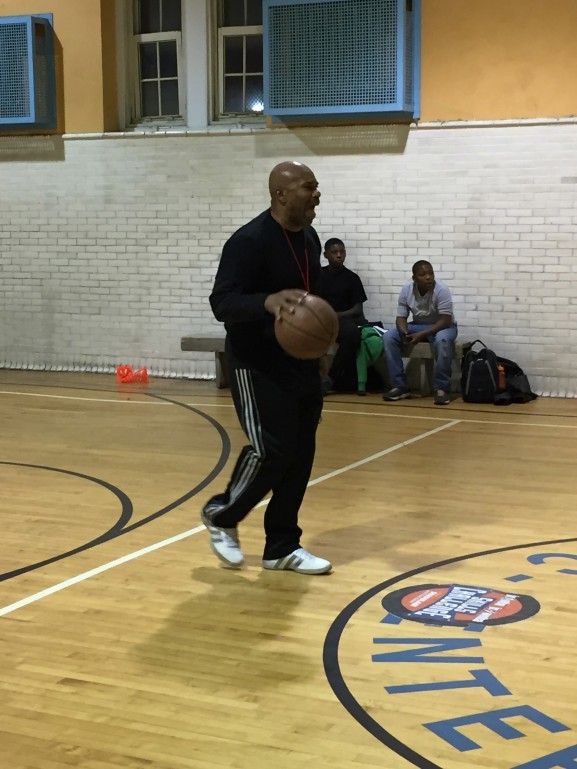 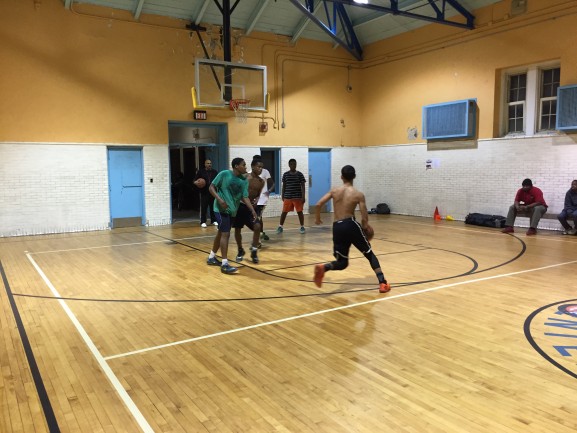 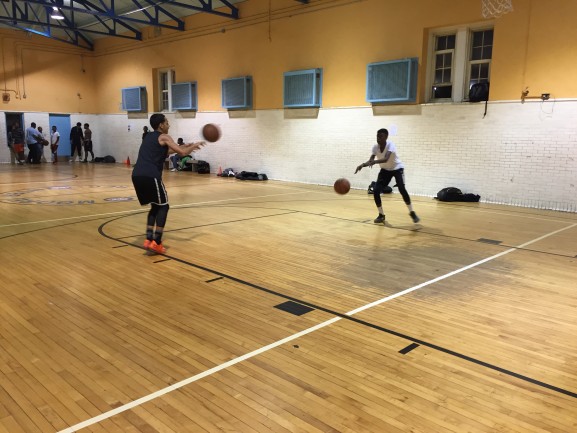 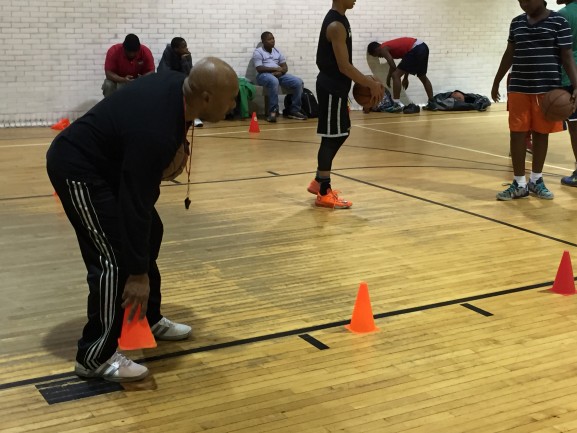 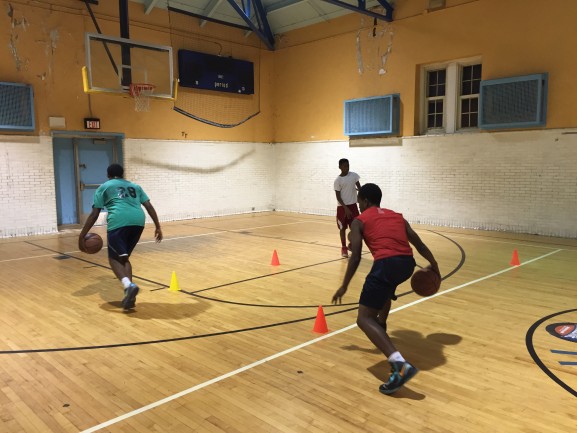 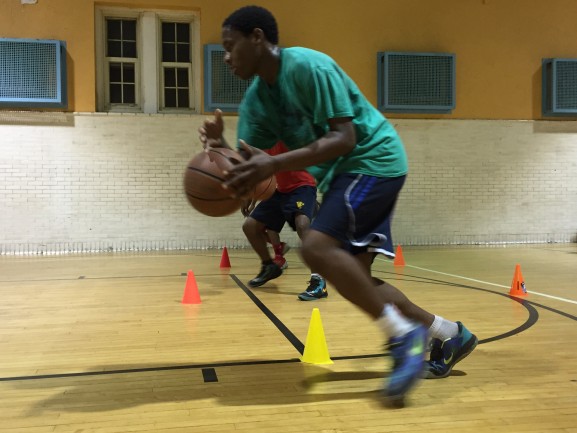 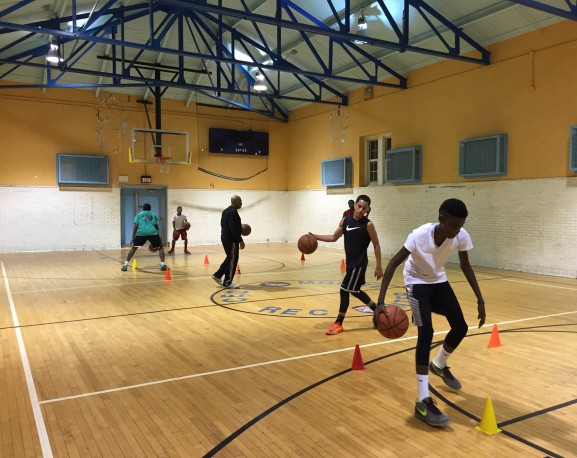 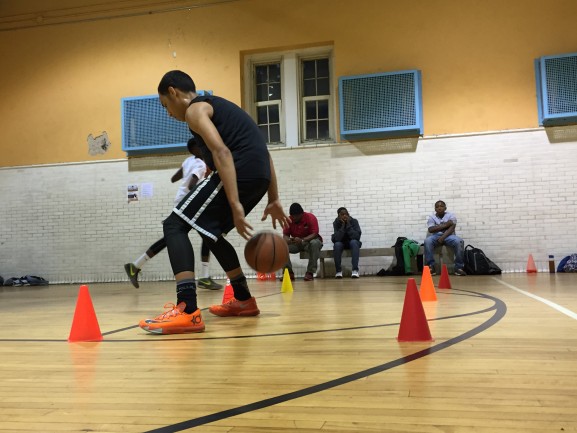 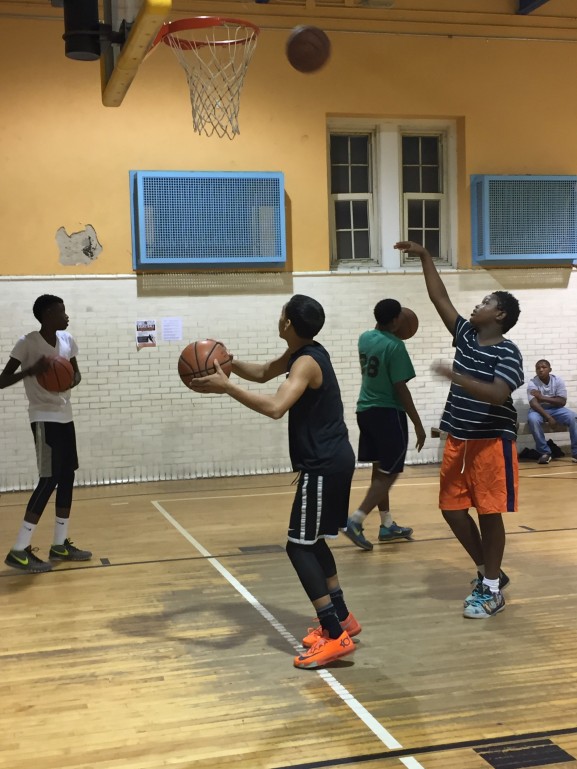 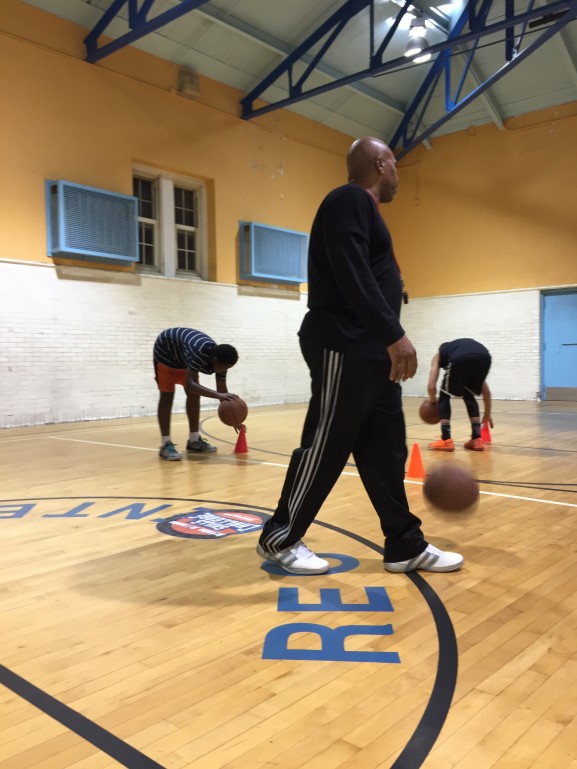 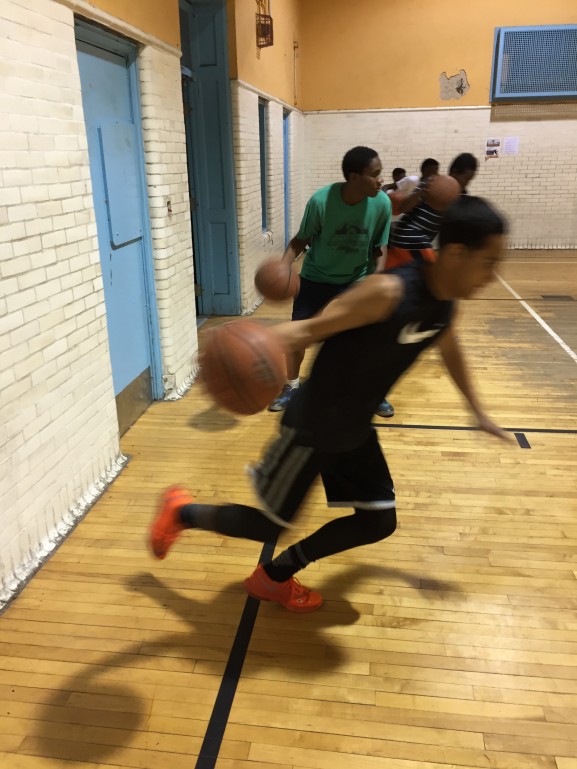 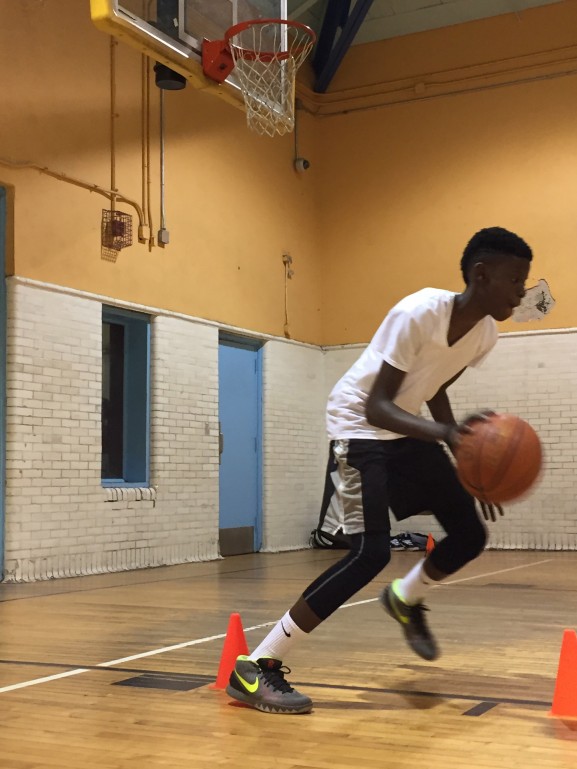 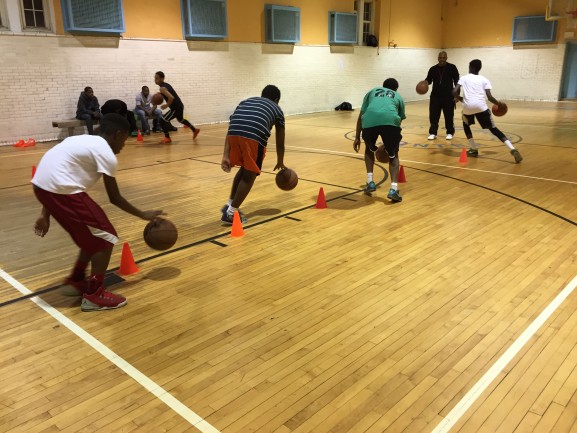 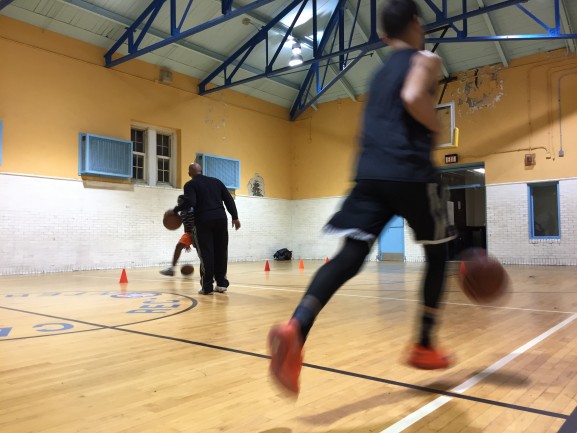 The recreation center helps children with some of the adversity they face and teaches social skills and responsibility. The after school children organize educational plays for the community like fire prevention and black history. The Tuesday before Thanksgiving, they have a sponsor that will feed 100 community members with children helping serve. They are a city run facility so they don’t always have everything they need but Godfrey, being the artistic type, works with what she has.

“We do have the basic things that we need to make programs run,” Godfrey said. “Could we use more? Probably. But using what we have is fine.”

Edward Kookie Flythe, or “Mr. Kook” as the children call him, is the director of sports at the center. He’s been at the recreation center for 10 years but has been mentoring children for 32 years.

Strawberry Mansion is part of the 22nd Police District where from 2008-2013 over 5,000 Philadelphians between the ages of 14-24 were shot or killed, according to the 2013 Philadelphia’s Strategic Plan to Prevent Youth Violence. The district has a population of approximately 70,000 and of those nearly 37,000 are under the age of 24. The strategic plan also outlined how the 22nd district has the city’s highest rates of concentrated poverty, child abuse and neglect and a 19.2 percent property vacancy, almost twice as high as Philadelphia’s average of 10.5 percent.

Flythe says the biggest challenges are letting the children know that education is important and keeping them out of trouble. He checks students’ report cards and makes sure they have pride in their community and are grateful for what they have.

“We don’t really have a playground but we have to utilize what we have,” Flythe said. “We make up a lot of things to compensate for what we don’t have.”

As a youth in Hunting Park, Kysheen Wilson was always looking for a place that he could get excited about. In 2007, the Philadelphia Police Athletic League began to use the building on N.10th St. [continue reading…]

Strawberry Mansion residents shared their concerns about the upcoming 2015 mayoral primary, and the impact a new mayor might have on the community. Many residents focused on the quality of education in the area, as [continue reading…]

Anton Moore, 29, aspires to be the peacekeeper in Point Breeze and beyond by organizing events and other outreach via his nonprofit organization Unity in the Community. What exactly do you do? My organization is Unity [continue reading…]