There is no such thing as a grand opening without a ribbon cutting, so what does an Italian cafe owner do when there is no ribbon in sight? Use a red, white and green banner of course.

Jan. 30, 2016, was a Saturday afternoon like no other for Lisa and Mike Lorenzo. It was the grand opening of their family-owned business, Lorenzo’s Café Espresso, something that they have been looking forward to for years.

“My family grew up in the restaurant business. It actually started here in Tacony with Spinelli’s Restaurant back in the 1940s. In 2001 my dad sold it and then passed away, so all these years we have been wanting to do a café in memory of him,” Lisa said.

The café is located on 4741 Princeton Ave. right off of Torresdale Avenue, Tacony’s main road. Lisa and Mike, who have been together for 34 years, purchased the property in August 2015 with the hope of bringing close-knit, family-run businesses back to the neighborhood.

“I grew up four doors away when this used to be a barbershop and even then there were no Italian restaurants like this,” Lisa said.

Mike’s goal is to provide the community with a little slice of Italy.

“We’re in the heart of Tacony. This used to be — and still is — a predominant Italian neighborhood and people are still looking for good, homemade Italian recipes,” he said.

Mike hopes to create an atmosphere where everyone walking through the door feels like they have entered their own home.

“Great food is the number one priority, but also talking to people and making them feel happy,” he said, and according to posts on the business’s Facebook page, they are doing just that. 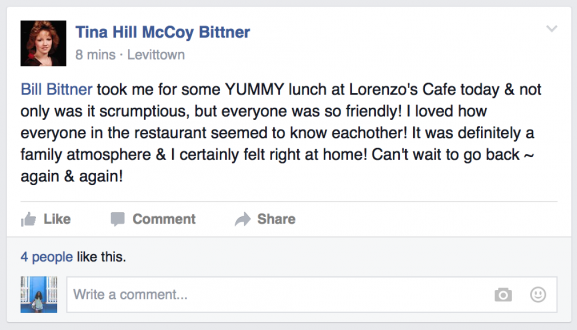 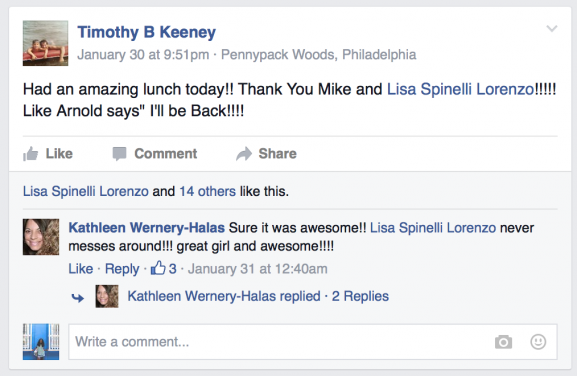 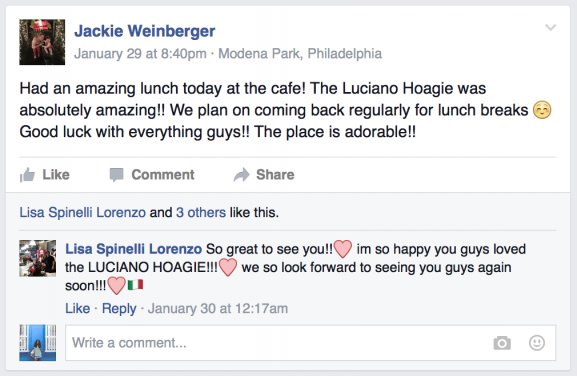 Joe Sannutti and Michael Thaete, president and vice-president of the Tacony Civic Association, were pleased by the positive impact that Lorenzo’s has had on the community thus far.

He believes that institutions like this create interest and bring more business.

“As a matter of fact, next week there is a grand opening for a bakery down the street,” Sannutti said. Michael Thaete agreed, adding that, “the Civic Association and the Community Development Corporation (CDC) are very active.”

The CDC’s  mission is to combat blight, lower vacancy and improve the physical condition of the commercial corridor of the Tacony community.

“With this much community involvement, people are saying, ‘Hey I want to live in Tacony,’” Thaete said.

Many neighborhoods in Philadelphia have been seeing an influx of new businesses and reconstruction. Mike Lorenzo believes that Tacony is on its way up as well.

“Fishtown really came alive. It’s just amazing. I was always told that every fifty years a neighborhood comes back around. It happened in Northern Liberties, then Fishtown, Port Richmond is next, and now they’re saying Tacony. So I’m hoping,” he said.

Though it took Lisa and Mike a few years to finally get their business going, Lisa said that they are happier than they have ever been. Her brother and sister passed away within a year of each other and for a long time she felt that she had nothing to live for. Now, five years later, she looks back and says that never in a million years did she believe that she would be where she is now.

“I wish he were here to see it, but I know he sees it. He would definitely be proud.”

— Text, images, and video by Margery Cedano and Mackenzie Mooney

At the Philadelphia Flea Market, vendors share unique histories behind the artifacts and antiques they acquire and sell. [continue reading…]

Herman Townsville will welcome this summer season with his new ice cream and water ice parlor. Townsville bought the building at the corner of  Stenton and Ogontz this past December and with the help of [continue reading…]

The bustling corridors inside of the Philadelphia Wholesale Produce Market (PWPM) can be an overwhelming place to think logistically about purchasing produce. The market is inside of a massive temperature-controlled building that spans more than 14 football fields long, where [continue reading…]