Jon Lyons was not always a runner.

In fact, after running track in middle school, he hated the sport for much of his life. He invested time in music, even touring with a rock band.

Then his life changed. He fathered a child. Things became complicated. He began to abuse substances and he knew he was headed down a dangerous road and an unhealthy lifestyle.

“I remember just being totally miserable and holding my daughter, she was so young, and she was just looking at me and smiling, I totally just lost it,” Lyons said. “I just realized I don’t want to live like this anymore, and I didn’t really know what to do.

“I had bought this really crappy pair of running shoes and I put them on and I’m just like ‘I’m gonna go for a run.’” 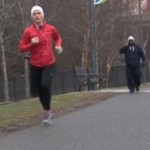 From that moment, his life was forever changed, he said. He returned to running and got things back on track.

Lyons got a job, working as a sales representative for Southern Tier Brewing Company and used his passion to fuel a community.

Two years ago, the Queens Village resident started Run215, an online community of runners throughout Philadelphia.

The group has truly blossomed into something special, with more than 5,000 members on Facebook. Lyons has planned numerous races for the group and it has really taken off.

“It all happened so fast that once it all started to move and take shape, I kind of just let it happen,” Lyons said. “Now there is a website. Now I’m working with the city. It’s really taking it off and it’s one of the most amazingly fulfilling things that has ever happened to me.” 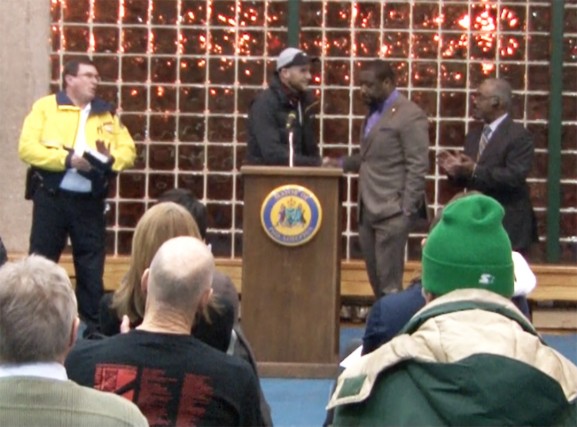 Lyons is working in conjunction with Philadelphia City Council in an effort to make the Schuylkill Running Trail safer for runners after a series of recent muggings.

“I’m sure it’s a stress and a big responsibility for him,” Run215 community member Carl Ewald said. “But he has stepped right up and taken the lead on speaking as the leader of the running community.”

Most recently Lyons and Run215 were featured on CNN for a “Beer Mile” run around the Philadelphia Museum of Art that was organized at the last minute during a January 2016 snowstorm.

It is that type of innovation and excitement that Lyons brings to the running community.

“It just makes being a runner here so much more fun,” Rebecca Parker said. “It brings everyone together and makes me feel lucky to be a runner here in Philly.”

In addition to his now famous “beer mile” Lyons has also planned other races and organized runs such as run to work day, a day that encourages members of the Run215 community to run to work as a group to showcase how much running is a part of Philadelphia.

While there are over 5,000 members of the community, it would not run without its leader.

“It is a huge testament to his personality,” Drew Dedgen said. “He is constantly checking in with the community, posting things and staying engaged. It is something that doesn’t really run by itself.

“He is a great man in general,” Dedgen added. “He is a single father and he has an amazing daughter Eden, she is really cool.”

Run215 has blossomed and now acts as a discussion hub for everything running in Philadelphia — events, running problems, training issues, whatever it may be. The website for the community even has a store with official Run215 gear for its runners to sport.

“I want to make Philadelphia recognized as the greatest running city in the country,” Lyons said. “The camaraderie in this city is like nothing I’ve have ever seen before. What’s happening in Philly, everyone wants a piece of it now. What we have here, the way all our groups hang out together. It’s kind of like a rivalry, but we all end up going out and having beers together. It is completely unlike any other city.”

Lyons, now 29, has big plans and dreams for Run215. What started as a small running group for him and his girlfriend two years ago has the potential to really be something more special than it already is.

“I believe we are barely scratching the surface,” Lyons said. “Eventually I want to spread that to other cities. I want to go to Chicago and say ‘Guys check this out, we can all get along, running is for everyone.’ ”

To get involved in Run215 or learn more about upcoming events and races, check out the Run215 site’s calendar of races in Philadelphia.

— Photos, video and text by Aron Minkoff and Jamie Gray.

In the Philadelphia real estate business, it is pretty hard not to run into the name Allan Domb. He served as the president of the Greater Philadelphia Association of Realtors and he has been hailed [continue reading…]

The word of God wasn’t the only thing heard at St. John’s AME Church. Councilwoman Maria Quinones-Sanchez, as well as the rest of the City Council members, traveled to the church located at 2114 S. [continue reading…]