Jocquelyn Cain, 21, was turned away when he tried to re-enroll in his high school two years after he dropped out. He was too old.

The Pennsylvania Department of Education says that only 70 percent of the students in Philadelphia public schools will graduate high school. This is well below the statewide number of 86 percent and also shorts the national average of 81 percent, according to the National Center for Education Statistics. Without a high school diploma, it is difficult for people like Cain to find gainful employment with opportunities for growth – and the roadblocks ahead of them are vast.

Fortunately, his older sister had heard about a school that specializes in getting students their high school diplomas as well as job training and postsecondary education placement. Cain applied to YouthBuild Philadelphia and was accepted into the Business Administration Scholars (BAS) program.

“YouthBuild is one of those second-chance type schools where you can get your diploma and your life back together,” said Eliza David (below), 21, a student also enrolled in the BAS program. 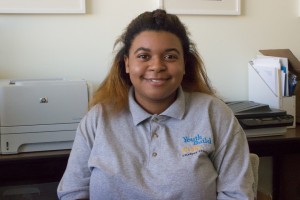 YouthBuild opened in 1992 and was the second of a national program started in East Harlem, New York, by Dorothy Stoneman. In 1997, the city of Philadelphia awarded the organization charter school status. It is located on the third and fifth floors of 1231 N. Broad St. and is one of the largest YouthBuild centers in the country.

“Many students come here feeling like they are a drain on society. We show them that they aren’t,” said Sarah Peterson, a communications and development associate at YouthBuild Philadelphia.

The application process is very difficult, with 780 students applying in 2015 and only 218 making the cut. This year, over 800 students have already applied for the 2016 school year, which runs year-round from August to August.

While at YouthBuild, Cain said he has been learning from his program as well as “computer skills, professional skills, and interview skills.” YouthBuild in general is “very helpful” and “everybody likes to work as a team,” he said.

While not being a typical high school, YouthBuild does its best to walk a fine line between having the best parts of a high school and improving upon the worst parts.

“We have prom. We have an upcoming community service trip to Puerto Rico this summer,” said Peterson (below). “We try to offer what other good high schools offer.” 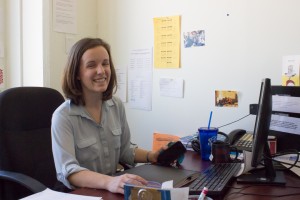 Teachers try to have a free and open environment for the students. Every teacher has a group of students that they personally have one-on-one conversations with. Teachers try to be emotionally available to the students and also go to community meetings so they are in touch with what’s going on in the environment where their students live.

All teachers are certified with master’s degrees in their particular fields, and most have taught elsewhere before coming to YouthBuild Philadelphia. The staff is very diverse in age, gender and race.

“There is a team atmosphere,” Peterson said. “I feel highly valued for the work that I do.” 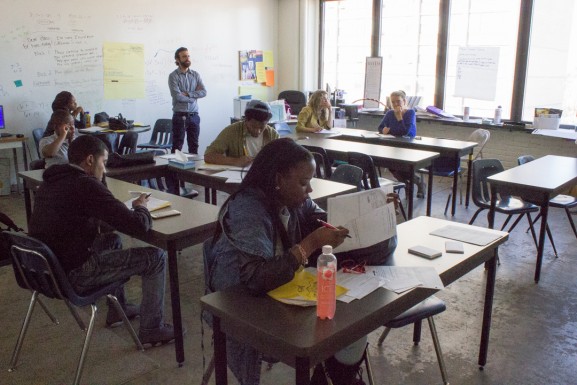 Funding for YouthBuild comes from myriad places, including public funds such as the Pennsylvania Department of Education and private donors. One contributor is AmeriCorps, a civic program that promotes national and community service.

“Service – or ‘community impact,’ as we call it, because some students associate ‘community service’ with the penal system – is a big part of YouthBuild,” Peterson said.

Students are required to complete many hours of community service, though the exact number varies based on the programs students are enrolled in. They also have the opportunity to become part-time AmeriCorps members; once they receive this status, they are given a stipend that can be used for their college education. 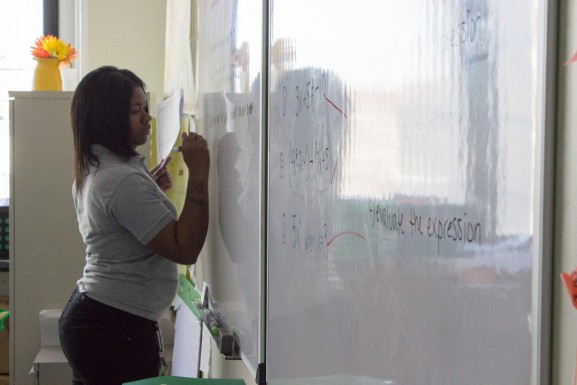 There is also a Starbucks, Saxby’s and UPS Store where students can find employment within the premises of the school. This teaches them real-world skills such as customer interaction and punctuality.

Of the 2014-2015 class, 33 percent went on to college, 31 percent found employment in their field, and another 15 percent were able to accomplish both. Most students go to the Community College of Philadelphia (CCP), Peirce College, the Thaddeus Stevens College of Technology and other smaller schools, and use them as a springboard to get to Drexel or Temple universities.

Once Cain reaches his second year in the program, he plans on attending CCP with the end goal of transferring to Temple University. His future career goals include working at the Central Intelligence Agency (CIA). David wants to attend University of the Arts and study photography

“We’re trying to string together a pathway for our students,” Peterson said.

– Text, images and video by Matt McGraw and Matthew Leister

Nicetown: A Park for All Ages to Enjoy

Nicetown Park, located at 4301 Germantown Ave., caters to community events and offers a playground for young children. The space is also occupied by two open fields that are kept clean and for any outdoor [continue reading…]