As this unpredictable election season enters its final week, tax reform is easily overshadowed by the new scandal of the day. But without taxes, the government wouldn’t have the money to build a border wall or fund universal health care.

The candidates’ tax plans are a cornerstone of their economic agendas and, at the same time, they exemplify their goals. Donald Trump is attempting Regan-like tax cuts and deregulation to fit his resurgent economic vision. While Hillary Clinton goes after Wall Street and the wealthy to invest in the “middle out, and the ground up,” she said in the final presidential debate.

Northern Liberties is a slice of upper-middle class and small business America, two groups that the candidates are vying either bolster or tithe.

“The people coming in the last couple of years were a lot of good money people,” says Frank Peta, 83, a former Northern Liberties Neighborhood Association president. “They were young kids making money who could afford all these new houses.”

Last year’s Pew Trust State of the City report showed Northern Liberties’ housing values rising by 17 percent. Home ownership is steady in the 30 percent range. And the ZIP code’s median household income is slightly below the national average, but still $15,000 more than Philadelphia’s.

Both Trump and Clinton claim that they will ease the burden on average Americans without adding to the skyrocketing national debt, but analysts are skeptical.

A Tax Foundation report shows that both plans have serious flaws. The reforms appear to be solid enough to put on a campaign homepage, but still flimsy and unsustainable in the long run. The next president will likely to make some changes to get the economy where they want it to be.

Ayub Cader (pictured at top), a self-employed accountant for 30 years, claims that if Clinton is president, the average citizen has nothing to worry about.

“From what I understand, the Democratic nominee does not want to impose a tax or raise taxes on the middle-class,” Cader said. “They only want to raise taxes on big corporations and the rich for government-based groups they feel are important.”

Under Clinton’s plan, most residents in Northern Liberties would be left alone. Less than 7 percent of households, those who make more than $250,000 or more, would see their taxes moderately increase. Residents who care for young children and the elderly would have double the deductions, and other similar exemptions would be available to the few low-income residents in the neighborhood.

Her plan would raise federal revenue, but would also slow economic growth by about 1 percent as well as adding billions to the national debt, according to the report. She argues that the negative effects would be counteracted by working-class families with disposable income and more time on the job.

“Giving a break to the average American and seeking more from the upper class helps create a stronger middle class without disrupting tax revenues and economic growth,” Jule said.

However, even if the tax hikes work on a national level, Peta believes that it might change the face of burgeoning neighborhoods like Northern Liberties. 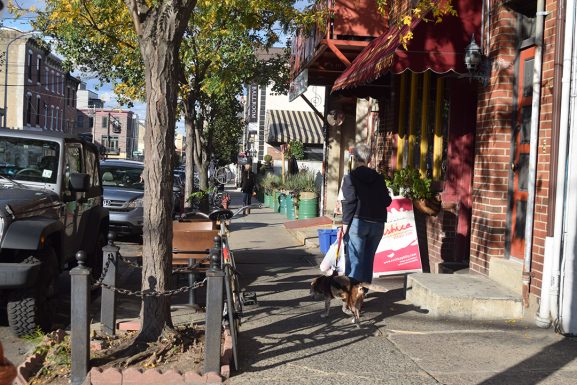 “I think it’s going to cause neighborhoods like Northern Liberties to shrink,” Peta said.  “You’re going to see a lot of people start running. Even the ones who bought the houses, after their [tax abatement] is over.”

Instead, a President Trump would cut taxes across all groups, essentially reorganizing the brackets. Under the plan, the more you spend in federal income taxes, the more you would see a cut.

The wealthy would benefit the most from this, but his plan would also raise the median household income of a neighborhood like Northern Liberties by more than $1,000 a year, putting the 19123 zip code closer to the national average, according to the report.

The cuts would cause federal tax revenue to plummet, says the Tax Foundation. GDP would still rise by the amount that Trump claims that it would, but the national debt would jump two trillion dollars higher – a stat that troubles fiscal conservatives. Trump argues that the re-negotiated trade deals he touts would get the U.S. the money it deserves.

Trump’s plan also does something unusual by removing certain exemptions. Up to 27 million Americans who use these exemptions would end up seeing federal tax increases. It’s hard to say how many of them would be in Philadelphia, but single-family “head of household” deductions would be included, according to a Tax Policy Center report.

Due to the circumstantial nature of the tax code, the next president’s economic legacy might be shaped by how they treat the wealthy. Cader is conflicted on whether or not taxing the upper class will work.

“Really, I don’t know what the best way is,” Cader said.

Clinton and Trump agree that the economy could be doing better. Soon, one of them will have to sell their plan to their constituents and Congress.

–Text, infographics and images by Alexis Ryan and Kamal Elliott.

The first quarter-mile stretch of the long-awaited Delaware Avenue bike trail, between Spring Garden and Ellen Streets, was opened in June. While cyclists from all over flocked to the area for the opening of the [continue reading…]

For 46 years, East Mount Airy Neighbors has vigorously pursued improving conditions in Northwest Philadelphia. Since its inception in 1966, this organization has encouraged community involvement through its longtime leaders and new members. EMAN announced [continue reading…]

Education: Councilwoman Helen Gym, “I need a big vision for the school district that people believe in.”

Helen Gym (D) is an at-large Philadelphia City Council member and vocal education advocate. Her goal in public office has been to to tackle widespread poverty through creating a quality public education system – the same system [continue reading…]