As of 2013, nearly two out of three Philadelphia adults are either overweight or obese, according to reports from the Centers for Disease Control and Prevention. That’s roughly a million Philadelphians.

Many factors contribute to someone being overweight or obese. Some factors include physical inactivity and an unhealthy diet. In the last 10 years alone, the Philly 2014 Annual Report found there were around 45,000 deaths in the city due to obesity-related illnesses.

One of the first things that comes to people’s minds when trying to stay in shape and lose weight is working out. A newer workout that has increased in popularity over the last few years is CrossFit. CrossFit is seeing a rising number of participants worldwide and is being recognized as one way to combat significant weight gain. 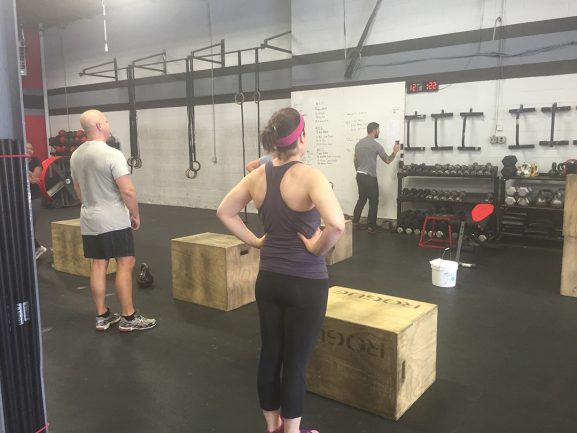 Fearless Athletics, a CrossFit gym located in the Bella Vista neighborhood, is one of many facilities that sees the growing number of people joining in on the intense workout routines. Owner Wil Vicinus says CrossFit brings something different to the table.

“I think a lot of it has to do with the fact that the workouts tend to be exciting and they tend to combine a whole variety of disciplines,” said Vicinus.

It’s different from a typical class at a regular gym. CrossFit works the entire body at great intensity. Although it may be a big jump for someone who hasn’t worked out before to start it right away, one trainee said there is nothing intimidating about it.

“Once you get into it, it’s really not that bad,” said Jason Williamson. Williamson has worked out at Fearless Athletics for the last two years.

“It’s just from the outside it seems very scary.”

In order to do CrossFit successfully and get the most out of it, a healthy diet is crucial to maintain. Poor diets are another factor that contribute to obesity. Vicinus preaches to his trainers and clientele that having a healthy diet will help them see results in the gym.

“We advocate that our athletes eat clean, healthy natural foods and try to eliminate certain things out of their diet,” said Vicinus. 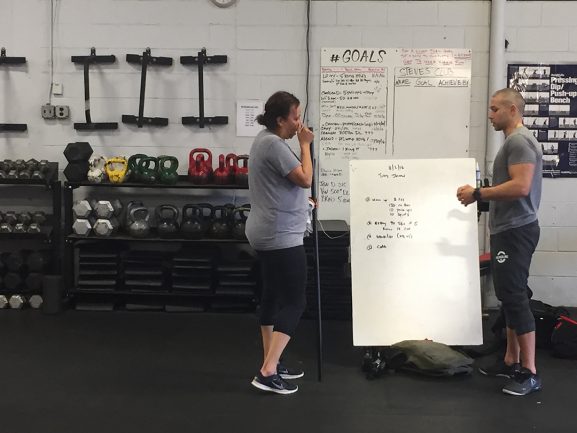 Adults aren’t the only Philadelphians at risk of obesity in the city. Children also face challenges when trying to increase physical activity. According to the Philadelphia Department of Public Health, about 85 percent of children get at least 30 minutes of exercise at least three times per week. However, a growing concern and wonder is with budget cuts in school districts, sometimes physical education classes are cut or reduced. Sometimes kids don’t exercise when they get home from school and gym class may be their only chance to get a good workout in for the day.

CrossFit trainer Fabio Scarpelli helps with the kids program at Fearless Athletics and says one of the best ways to get kids moving is to make workouts into games.

“Schools sometimes don’t have good programs and parents are looking for something,” said Scarpelli. “I’m a parent. I have kids. Life, today, can be very sedentary.”

The Philly 2014 Annual Report also found that kids can purchase almost 500 calories of candy, chips, and soda for $1.60 at more than 1,500 stores in the city per visit. The environment surrounding kids and adults can support them into making unhealthy choices.

At first glance, obesity and CrossFit may not be things that go hand and hand. The heavier someone is, the tougher it may be for him or her to do some of the workouts. Fearless Athletics doesn’t start newcomers off with the highest intensity workout. Like anything new, the trainees work their ways up to the tougher workouts.

Fearless Athletics trainer Chris Bumm emphasizes that when someone is overweight and walks into the facility for the first time, they are the weakest they will be in the process. They have to apply effort and commitment and then they will see results.

“I think part of the struggle comes with how hard people are willing to push themselves,” said Bumm. “You don’t play full contact football with NFL players before you play peewee football.”

That rule of thumb applies to children and adults. Adult obesity is noted as worsening over time in Philadelphia, according to a 2015 report conducted by the Philadelphia Department of Public Health. 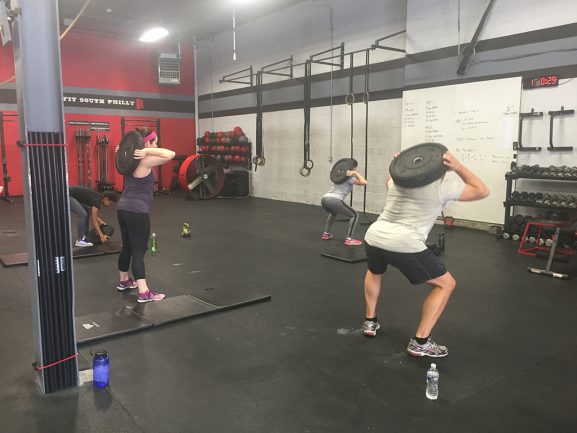 However, this outlook can be combated with the statistics that among adults who are using CrossFit to stay in shape, 60 percent of them are between the ages of 25 and 44. The growing popularity in CrossFit over time has allowed the slow decline in the city’s obesity rates.

The nonprofit organization RTI International created an interactive map depicting where the most obese areas are in Philadelphia. Graduate Hospital, Grays Ferry and Point Breeze are depicted as places where obesity is most prevalent in South Philadelphia. 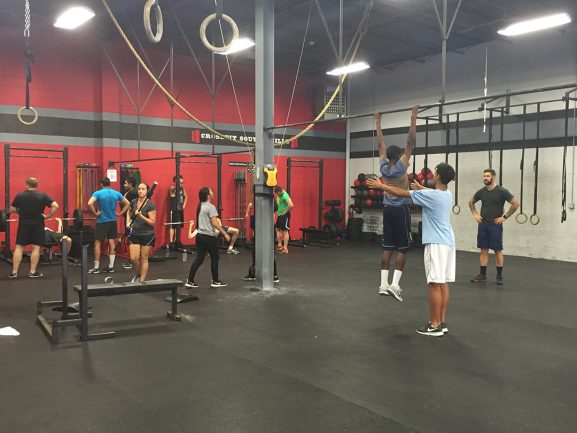 Although CrossFit contains intimidating workouts to some, Vicinus continues to remind his team the important impact Fearless Athletics has on others.

South of South: Sorry, No Dogs Allowed … For Now

No. “No” is one of the first words a dog hears in life and sometimes never learns. But for dog owners living in South of South, “no” is a word they hear all too often. South Philadelphians love [Read More]

Frank Milillo grew up playing on the streets of South Philadelphia. Now, as the commanding officer of the 3rd Police District, he watches over them. Milillo’s district stretches south of Lombard Street and east of Broad [Read More]

People all over the world have anticipated the arrival of Pope Francis to Philadelphia for the World Meeting of Families, which is the largest gathering of Catholic families in the world. One local South Philadelphia [Read More]