Based in Fishtown’s non-profit organization Lutheran Settlement House, the Men Can (Prevent Family Violence) Campaign is an initiative to address domestic violence throughout Philadelphia. By providing education, garnering attention and taking new approaches, Men Can is trying to change culture by getting to the roots and core of the abuse.

Traditionally, domestic violence prevention has been a women’s movement. Violence in relationships is assumed as a “women’s issue” especially because females make up the majority of victims. The other majority, men acting as abusers, has not been involved in prevention efforts. That’s where Men Can hopes to fill the gap.

Although Toby Fraser, community educator at Lutheran Settlement House, started working with Men Can in mid-2016, he’s been a part of the movement to prevent domestic and sexual violence for almost a decade. According to Fraser, altering the masculine mindset is what the campaign wants to hone in on.

“We know that we live in a culture that not only glorifies male violence as a solution to most any problem, and also teaches boys and men that emotions, other than anger, are weakness that should be shunned,” Fraser said. “By addressing men, we are engaging in the work of helping to prevent violence through working on that larger culture shift that is necessary.” 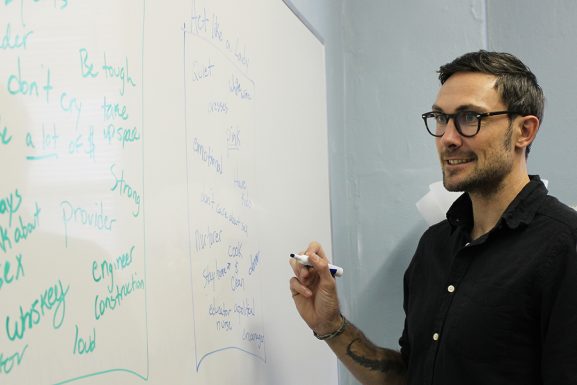 Since 2009, Lutheran Settlement House has gathered staff members and a steering committee of community volunteers to construct what the campaign will do. The plans for Men Can have centered around an annual rally, including the 2016 Men Can Fifth Annual Rally on Oct. 5. The campaign’s efforts have expanded from solely organizing the rally to year-round planning, including facilitating workshops for men to have conversations about male violence.

While Men Can is one of the only initiatives that attends to the abusers to combat domestic violence in Philadelphia, the campaign and Lutheran Settlement House do not work alone. The Pennsylvania Coalition Against Domestic Violence provides Philadelphia with four agencies: Lutheran Settlement House, Congreso De Latinos Unidos’, Women Against Abuse and Women In Transition. The “DV4” all answer the same 24-hour domestic violence hotline.

Women Against Abuse operates two 100-bed “safe havens” for when women and children need to leave their homes due to domestic violence. As Philadelphia’s only safe havens, availability for these beds are scarce. Women Against Abuse turned away 15,751 requests for safety in fiscal year 2015, a 28 percent increase in turn aways from 2014. Considering the need for more beds, the city and agencies have a greater need for campaigns like Men Can.

“As close collaborative partners with Lutheran Settlement House, Women Against Abuse enthusiastically supports this campaign,” said Elise Scioscia, director of policy and prevention at Women Against Abuse. “Domestic violence is not a women’s issue. It’s is a threat to public health and safety, and we all need to be part of the solution.”

In 2011, the Philadelphia Police Department received 145,904 domestic violence related calls. During the same year, the four agencies combined provided 12,128 individuals with 26,766 hours of counseling and advocacy assistance and provided 587 adults and children with 32,508 nights of shelter care. Their community education and training reached 17,988 individuals. Volunteers provided 4,725 hours of service, according to a University of Pennsylvania study. 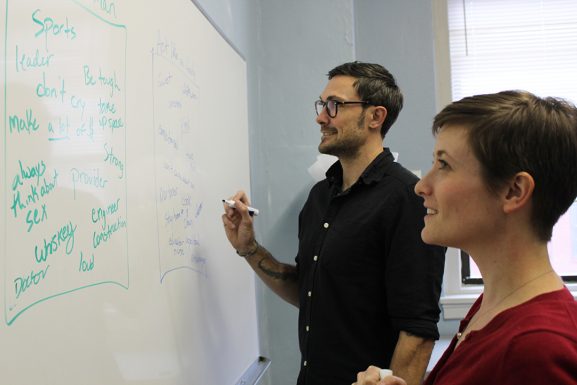 In order to change how men think about domestic abuse, Men Can is looking into how boys are socialized. The campaign is working with national organization Futures Without Violence that specializes in programs that teach youth about what healthy relationships look like. This includes Coaching Boys Into Men, a program that will allow Men Can to train coaches in how to be mentors for young athletes while being conscious of male socialization and violence. Men Can wants to take these efforts into schools as well.

Studies show that individuals following restrictive or harmful social norms are more likely to perpetrate physical, sexual and emotional violence. Prevention initiatives that emphasize positive bystander behavior and engage men and boys in building healthy masculinity have been shown to impact the social norms that condone violence, according to Futures Without Violence’s fact sheet about children’s exposure to violence.

Joe Garcia, Temple University Police Department (TUPD) deputy chief of administration, circumvented growing up into a violent man after witnessing abuse in his family through acquiring resources and education about male violence during his youth. Garcia, who has worked for TUPD for 28 years, now uses his own positive shift away from violence as an advocate against domestic violence. Garcia brought Men Can and TUPD together to address domestic violence at a university level.

“Men can go seek help; I’m a product of that,” he said. “I knew I had pent-up emotions and anger for my father not protecting me and my brother. We needed help and got help. We broke that chain, and now we’re not abusers. Those education and resources is what Men Can provides. That’s the vehicle to help men when they’re in trouble and guide them.”

Even Fraser has been impacted and feels more holistic through being a leader in domestic violence prevention.

“It’s been transformative for me personally on learning some of the stuff that I was taught as a young child and on becoming a more full person now and feeling good about that,” said Fraser. 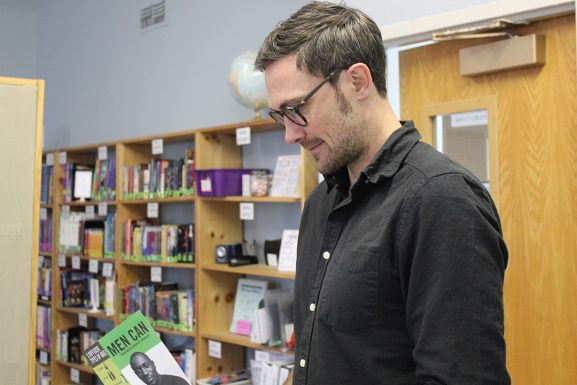 Currently Men Can has met all of their numerical goals. The campaign expected to get 200 people out to the 2016 rally and got around 350 including Mayor Jim Kenney. When Men Can did photo challenge on Instagram at University of  Pennsylvania, the team said they ran out of the 500 fliers they brought. Despite reaching these goals, making an impact and providing help is what the campaign wants to stress.

“I know a lot of abusers that have changed, and a lot of that change comes through understanding where they were before and what needs to be different in the future,” said Fraser. “There’s help available is the real big part that Men Can can help with. To say not just ‘You’re a bad person for doing this,’ but to say ‘I don’t think this is OK and I’d like to help you change’(and) to be there with people as they’re going through it.”

If you feel like your safety is in danger, call Philadelphia’s toll-free, confidential, 24-hour Domestic Violence Hotline, 1-866-723-3014.

https://vimeo.com/59813654] It was a busy scene at the Fishtown Recreation Center this weekend as dozens of people gathered at this month’s Code: Red White and Blue event. By midmorning, more than 100 people had gathered [continue reading…]

The Piazza at Schmidts hosted Radio 104.5’s Winter Jam this weekend in Northern Liberties. The event featured performances from Tegan and Sara, Matt and Kim and three other bands. However, the huge turnout for this free [continue reading…]

Julia Press Simmons, 34, has been writing since her father called her a “little liar” and gave her a pen and pad at the age of 11. He told her to start writing her lies [continue reading…]