Philadelphia is struggling with a huge literacy deficit: roughly two-thirds of adults are considered low-literate and don’t maintain basic literacy skills, according to the Philadelphia Workforce Investment Board. In the face of this deficit, there has been an overwhelming response by both the community and institutions fighting to promote literacy in the city.

The Free Library of Philadelphia offers different services like English as second language (ESL) classes for adults and after-school programs for children. For example, Building Bridges with Books, a $1.5 million federal grant program, was initiated in 2015 for children in kindergarten and first grade to give them the opportunity to visit libraries during field trips.

“Libraries in the U.S. have a pedagogy for working with youth,” Adam Feldman, outreach and education coordinator for the Free Library, said. “It’s sometimes called HOMAGO: hanging out, messing around, geeking out.”

The thought process of HOMAGO is to create spaces where kids can learn about the things they like without the structure of a classroom, Feldman said.

“It’s about exploring the passion of the individual,” he said.

However, regardless of the numerous successful programs tailored to the individual communities within the Free Library’s circuit, the organization struggles to capture and hold the attention of many surrounding neighborhoods.

Charella Martin of North Philadelphia sends her daughter to an after-school program at Tree House Books, a nonprofit literacy center and pay-what-you-will bookstore around the corner from her house.

“It helped her a lot with her school – and now she likes to read herself, something she didn’t do before,” Martin said.

Rather than being a typical after-school program that focuses on homework and studying, the Tree House philosophy is to navigate illiteracy by making reading fun – an attractive notion for children who have difficulty. Even though her daughter has developed an interest in reading, Martin said they don’t go to the library often or take advantage of its services.

“We just stick with Treehouse,” she said. “It’s part of our community. Plus, they don’t tell us to be quiet when we walk in the door.”

Martin’s reluctance to visit the library is not uncommon, according to Kate Eckert, children’s librarian at the Donatucci branch in South Philadelphia. She said the library is often seen as part of a larger municipal government that some residents resist.

“The system doesn’t work for everybody,” Eckert said. “It’s betrayed people before. It’s our job as librarians to break down those barriers and make the library more accessible to everybody.”

As an initiative that is “for the community, by the community,” organizations like Tree House Books have the unique advantage of connecting with the neighborhood through familiarity. For years, North Philadelphia resident Nyseem Smith was a student who attended Tree House after school for help with his reading. Now, he works there as a project manager.

“Some corporations, like the library, they don’t know about it,” Smith said. “Being here, living here, knowing the people… It allows me to be hands-on with the approach and make house calls to the student’s parents.” 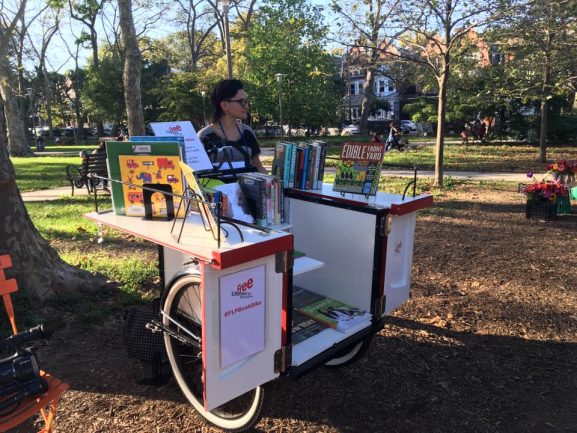 Within a community that has a sometimes negative mindset toward systems and institutions, the Free Library is constantly looking for ways to relate. One of the ways the library is bridging the gap to the community is through the Book Bike, a new outreach innovation. The portable library travels to different communities and events, trying to encourage people to take advantage of the library and its services.

While it is new to Philadelphia, the concept of a portable library has been successful in other places. For example, Seattle Public Library has a thriving Books on Bikes program started by librarian Jared Mills four years ago. Since then, the SPL has seen an increase in program attendance.

“We’ve seen attendance in programs skyrocket,” Mills said. “By spreading the word about what we offer, people have begun to take advantage of the programs and services they’re interested in.”

The Seattle program shows a positive trajectory for Philly’s new library on wheels, which has already had its own medium of success. Though the Book Bike is still in its infancy, it has been a successful tool in creating a more substantial relationship between the community and the library.

“A lot of community groups have reached out to the Book Bike specifically and invited us into the community,” Eckert said. “And that’s fantastic, to be specifically handpicked. They want us and we want them.”

For more information about the Book Bike, or to schedule a visit to an event, visit the FLP’s events page.

https://vimeo.com/39605989] Although Officer Tim Hagins now works in the narcotics unit of the Philadelphia Police Department, he hasn’t forgotten the cases of missing and abducted children he’s dealt with during his career. Hagins is dedicated [continue reading…]