In an alley on Percy Street, just a few blocks away from Pat’s King of Steaks and Geno’s Steaks, a mural attracts events such as music video tapings, parties and even church revivals.

The mural began when Guinn received a grant from the Knight Foundation, an organization that awards money to talented individuals to foster civic engagement and artistry. The grant was for an artist-driven project and was an opportunity for Guinn to solely make the artistic decisions rather than a community process where he interviewed people on what they wanted. He decided on Percy Street because he wanted to make it a destination for people to visit and to deter crime in the area. Guinn wanted to improve the lighting of the alley and thought of an idea for a design that included it. Through a mutual friend, he got in touch with Billiau.

The two worked on Photoshop to brainstorm the design. They went through about 30 designs before deciding on one they liked. Guinn thought of the painting design of abstract shapes, and Billiau lined that design with light.

For the lighting, Billiau used a LED product called flexineon. These lights contain red, blue and green LED nodes that can provide a multitude of colors. The lights are unbreakable as well as energy-efficient. According to Billiau, the lighting only costs $4 a month.

“People who own these homes pay the electric on this [the mural],” Billiau said. “We didn’t want the financial costs to cause them issues.”

A computer controller installed overhead the mural operates the lights. Billiau can also control the lights from his laptop. He programmed the lighting to run about five hours every evening, ending at around 10:30 p.m.

After a test run of the design in the Opera Philadelphia’s scene shop, the two started the installation on Percy Street. It took about a day for Guinn to paint the design and three weeks for Billiau (pictured below) to install the lighting. 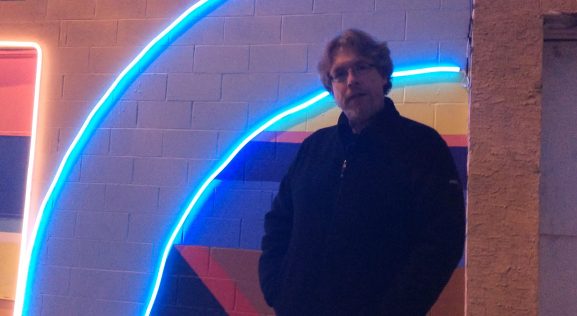 The mural officially debuted in June 2016. According to Guinn, the reaction was very positive.

“People got really excited about it,” Guinn said. “They went back there and started taking selfies.”

“It doesn’t say anything,” Billiau said. “It doesn’t want to be anything. It’s just art for art’s sake.”

For the most part, the mural has done what Billiau and Guinn set out to do — make the alley a viable destination and deter crime in that area.

“As a member of that community, that spot has been a problem with graffiti,” Ric C. Temple, an administrator for Taking Our South Philly Streets Back, an anti-crime community organization, said. “From knowing that, the mural deters people from going there and making it an undesirable place.”

So far, the mural has only faced one setback — graffiti by an unknown offender. However, Billiau stated artists showed up the day after the graffiti was found to clean it up.

“Philly artists are very protective of each other,” Billiau said.

The mural’s popularity hasn’t died down since its launch in June. Most recently, the band Ghost Heron filmed a music video, with the art as the backdrop.

“We chose to film our video for the song ‘Been Walking these Streets’ there because it is the result of neighbors coming together to bring something positive and beautiful to our community through art which changes the atmosphere and brings hope,” Sarah Becker, a member of the band, said.

Word of mouth spread through social media, according to Billiau.

“Instagram is what really got this kicked off,” Billiau said. “By the end of debut week, there was at least 100 Instagram photos of it.” 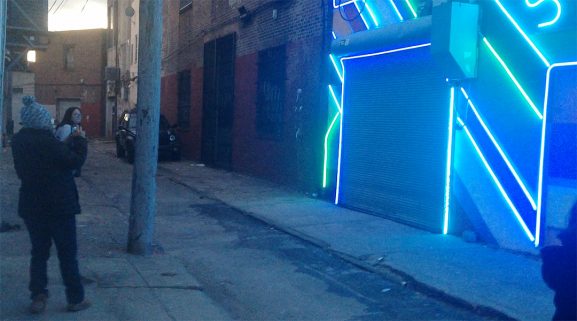 Popularity increased again after an opening party was held at the end of July. About 500 people attended the party, which included a Mr. Softee’s ice cream truck and a Kung Fu Hoagies truck.

Billiau stated part of the popularity is due to the uniqueness of the project. People have lit up murals before, but it is rare to see the lighting be an actual part of the art.

Guinn and Billiau plan to continue their collaboration and work more on improving Percy Street through art. Their goal is to get the entire alley lit up by the end of the summer.

“We want to continue this and further explore this new art form we stumbled upon,” Billiau said.

In the heart of South Philadelphia lies a small yet dedicated neighborhood organization. The Newbold Civic Association, formed in 2006, was created to serve as a forum for residents to share their concerns and interests [continue reading…]

If you build it, they will come. Recreation centers and urban parks serve as places for people in the busy city lifestyles to escape it all without really having to leave the city limits. From [continue reading…]