This past Thanksgiving, despite near-freezing temperatures, Cynthia McQueen stood outside.

She watched as families, consisting of as many as 22 members, filed into her work location – a humble building on the 3200 block of Reed Street. The families showed up for a bagged meal full of many Thanksgiving staples including turkey, corn and peas.

McQueen made an effort to talk to many of the attendees.

“It was very rewarding to see how grateful people were and how it really helped them,” McQueen said. “That’s how you know you’re on the right track.”

The Grays Ferry branch of The Salvation Army of Greater Philadelphia has opened its doors again, after several years of closure. McQueen, who runs the South Philadelphia branch, said The Salvation Army previously operated a location in the building from 2000-06, but that the location received new life after staving off a potential sale and receiving renewed support from officials. 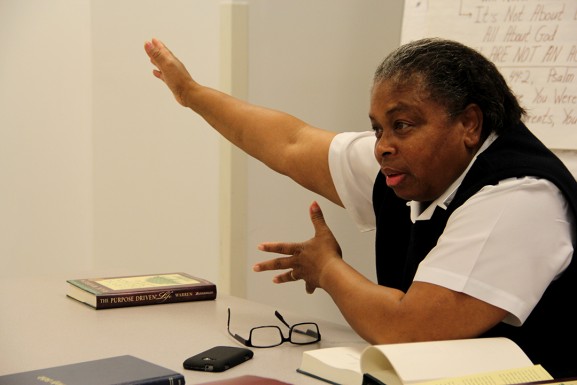 According to McQueen, more than 500 families attended the Thanksgiving event – one of the many ways her organization is aiming to strengthen the spirits of the community members who surround it.

“We do what the whole Salvation Army does,” McQueen said. “We try to serve the community and meet the social service needs as well as the spiritual needs of the individuals in the community.”

According to The Salvation Army’s website, the nonprofit began in 1886 and aims to provide “social and spiritual services to communities throughout the world.”

Tammy Dean is someone who sought that help last November. But soon after walking into the location as a recipient of the Salvation Army’s offerings, she became the branch’s volunteer secretary. For many throughout the community, Dean is a source of comfort for them.

“I’ve had people come in and … tell me their stories,” Dean said. “Some people just need to talk. So I listen. That’s all they want – someone to listen.”

“Some are embarrassed to come in to ask for help,” she added. “I tell them, ‘Everybody has a moment when they’re down.’ But they don’t need to be down. Just be grateful there is a place here to help.”

Among the services the location offers are an emergency food pantry, a senior group and religious gatherings.

Attached to the bulletin board in the Grays Ferry office is a particularly gracious “thank you” card written by a family who participated in a toy workshop held near Christmas of last year. McQueen said it’s among the highlights of the nearly five months she has worked there. 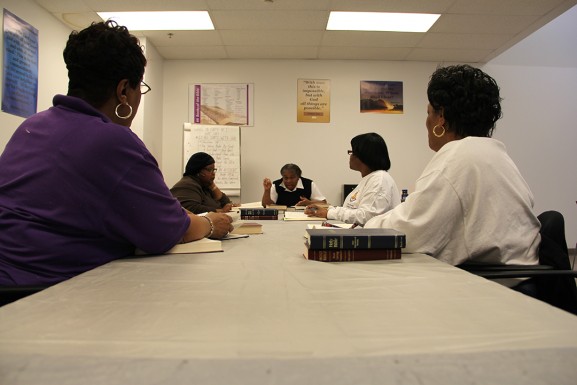 She gives a lot of credit for the holiday events and the branch’s success to Hester Dixon, the former associate director of operations for The Salvation Army of Greater Philadelphia. Dixon died on March 5 at the age of 65. According to her obituary, she was scheduled to retire less than 10 days after her death.

In the short time McQueen has worked in Grays Ferry, she has seen many similarities between the surrounding neighborhoods and other parts of the city. Among the most common, McQueen said, is a desire to provide the children of the city with a safe place to live.

“There is a lot of the crime and violence, and it’s hard to find those places where they can be safe,” McQueen said. “That’s what we offer them. This can be a place that people don’t have to worry about what has been going on outside.”

Dean described the community the organization serves as “tight-knit.”

“Everybody knows everybody,” she said. “Everyone is trying to help one another.”

The branch’s staff isn’t large – McQueen has a few volunteers and a limited number of employees. But they all work together to provide what they hope are valuable resources to South Philadelphia.

For the seniors of the community, McQueen said the organization’s goal is to enhance their spiritual core. Sunday school is also held in addition to a ministry worship service.

An overnight camping program in the Poconos is another event the branch is aiming to push.

“It’s an excellent chance for Center City children to experience something different in nature,” McQueen said.

For Dean, the experience of working for The Salvation Army in Grays Ferry has been incredibly rewarding so far.

“There are a lot of heartfelt moments with the community when [people] come in and talk to us,” Dean said. “They’re getting excited. Just to see the excitement in their face and come and get a free meal. They can come and get a fellowship and praise and worship. It’s really a joyful experience to be involved.”

Dean added that she didn’t know much about The Salvation Army before walking through the doors of the Grays Ferry location.

The second oldest specialized business improvement district in Philadelphia is celebrating its 20th anniversary this year with plans for continued achievement. The South Street Headhouse District recently hosted its “State of the Street,” a look [Read More]

A walk down Tasker Street from the subway to Urban Jungle on Passyunk Avenue takes one past two or three neighborhood Italian restaurants but nothing beats fresh tomatoes from your own garden. Kristin Mulvenna, the [Read More]

Every day, more than 200 adults with intellectual disabilities from across greater Philadelphia get out of bed and go to work in part due to the efforts of the staff at Programs Employing People. The program, which started [Read More]