The loud sound of the collision of a rubber squash ball with a white wall reverberated around the squash courts at SquashSmarts, on the second floor of the Lenfest Center, as sweat dripped down the faces of the students and coaches while they prepared for another day’s work.

The noise and buzz represented another day at the facility in Hunting Park, where students from all around the community come to play squash and boost their academic profiles.

SquashSmarts, founded in 2001, is a free out-of-school program that works with students between sixth and 12th grades. The program uses squash to keep them in school, in shape and on track to graduate.

The squash program serves the Roberto Clemente Promise Academy Middle School, Mary McLeod Bethune Elementary School and George Washington Carver High School of Engineering and Science in North Philadelphia, where the program operators pick up the students and bring them to practice.

“I think what is most important about the SquashSmarts community is the sense of family,” said Alix Cummin, the director of high school academics at SquashSmarts. “The students are working hard to succeed and go to college. The family support we try to develop here through our long-term relationships speaks to the parents’ commitment to their children’s progress in life skills and educational goals. I think that speaks value to this community.” 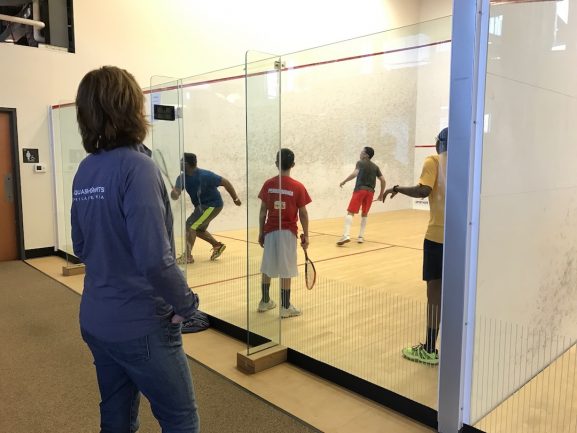 The organization also has a second location in Philadelphia at Drexel University’s Daskalakis Athletic Center.

Education is just as important as teaching the kids squash. Cummin said the SquashSmarts staff prepares children for what is next to come in their education and how they can get ready for college.

“We want our students to own their education,” said Cummin. “We want them to know about where they would like to go to college and how they can get there. Education is obtainable and the better GPA, the more options you have and the more financial aid you receive.”

Nabilla Ariffin was a professional squash player in Malaysia for 10 years and joined the SquashSmarts staff in September of 2016 after being a city planner with the city’s office of economic development and U3 Advisors. At SquashSmarts, she is the community impact director, helping to grow the relationships between SquashSmarts and the Hunting Park community.

“In the first three months that I was here, I was reaching out to the community development corporations in the neighborhood,” said Ariffin. “I wanted to make it known what we have here at SquashSmarts and how we are positively affecting the community. We are trying to get more involved with community service in our surrounding neighborhoods.”

Their “Five Pillars of Programming“ represents the approach SquashSmarts takes to its academic and squash instruction. Cummin said the five pillars – which include academic support, squash instruction, fitness and nutrition, personal achievement and leadership – mold these teens to be the best they can be.

“Our instruction comes both from our group instruction and also from knowing our students on a personal level,” said Cummin. “We want to be able to give them an academic or squash challenge to push them to do their best. We are looking to have our students be independent problem solvers and decision makers when they leave here to go to college.” 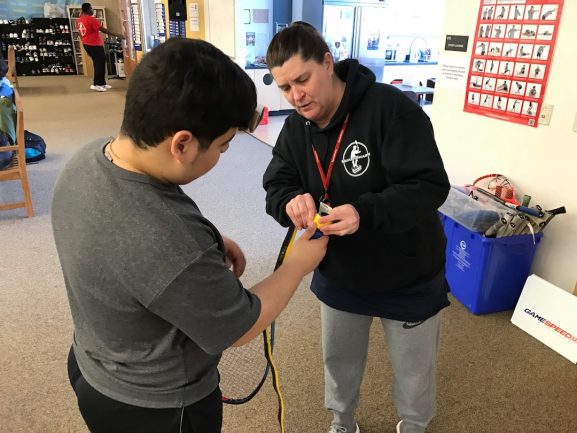 One of the students who has become a promising squash player and academic leader is Dubois Stewart, who is in his fourth year with the program. Stewart is a senior at the Science Leadership Academy in Center City and is trying to play squash in college.

He said if there is one thing he has learned from this program it would be to continue to help members of your community no matter what.

“I think the most important thing I learned here is to give back in a way that people understand, see and appreciate,” said Stewart. “I wouldn’t have my friends that I made here if I wasn’t with the program. I thought about leaving at one point because I wasn’t sure if I could make the commitment but when I saw how much the staff cared about me after one year, I felt like I shouldn’t give up on this program.”

Dewon Flythe spent seven years as a member of the program and now is a Coach Across America mentor, guiding young people to be their best selves like he was taught when he was in the program.

“I had good relationships with the people who taught me and coached me at SquashSmarts,” said Flythe. Checking in with the kids in school and on the phone is important for them to know that as coaches and mentors we care about them and we are looking out for them.”

-Text, images and video by Hannah McComsey and Dalton Balthaser

Malcolm Kenyatta grew up in North Philadelphia and graduated from Temple University. He is now the member engagement coordinator for the Greater Philadelphia Chamber of Commerce and the youngest member of the Liberty City LGBT Democratic [continue reading…]

State Rep. Donna Bullock was sworn in as the legislator for the 195th District in August after her predecessor, Rep. Michelle Brownlee, pleaded guilty to a conflict of interest charge and tendered her resignation. The 195th District stretches [continue reading…]