Leslie Callahan can’t pinpoint a specific reason why people end up at her church, located on the southwest corner of Wallace and 10th streets.

But she does know that once people walk through the front door, most become a member of St. Paul’s Baptist Church for life.

“Many of our members have been here a very long time, many grew up in the neighborhood,” said Callahan, 47, who has been pastor of the church for the past eight years. “Many of them have moved elsewhere now … but they grew up here, this is the church where they got their Christian foundation. I have one member who’s 90 years old who came here as a baby. So she’s been a member, she’s been a part of this congregation her entire life.”

St. Paul’s has always been in the Poplar neighborhood. It was founded in 1883 at 8th Street near Girard Avenue, and moved to its present location in 1916.

The church serves as a “community hub and open space” for those in the neighborhood, Callahan said. The site is a partner with the anti-hunger group Philabundance, and also has an internal food pantry to help feed the poor. On Monday and Wednesday nights, it hosts Narcotics Anonymous for recovering addicts, as well as other community meetings throughout the week.

More recently, St. Paul’s has been focusing on the impact of historically black colleges and universities, which culminated March 26 when a choir from Howard University came up from Washington, D.C., to perform in front of about 40 on the church’s second floor. 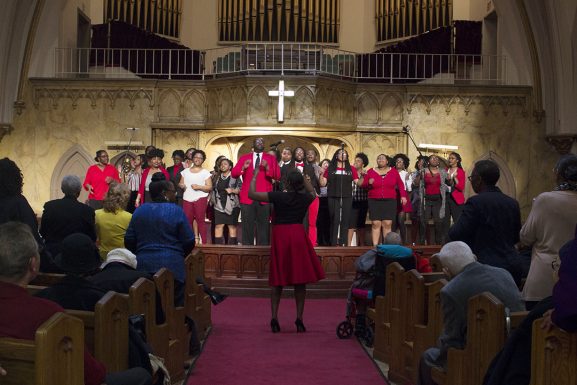 Anubia Simpkins, a junior jazz voice major who performed, said the church and its congregation was amazing.

“It was just the energy of the place,” she said. “You can definitely see the work of God in this place.”

While many who attend St. Paul’s live in the area, others have moved out — but continue to attend each week due to the church’s long history and its commitment to helping the poor.

Charles Brown, 47, currently lives in Cherry Hill, New Jersey, but grew up in North Philadelphia near 20th and Lehigh. Six years ago, he was elected as a deacon at St. Paul’s.

“First of all, it’s historic – it’s [134] years old,” Brown said about why people citywide come to the church. “People know about this church … and our pastor is very dynamic … she’s a dynamic preacher who preaches from the Bible.”

Along with the church, the E. Luther Cunningham Community Center sits right next door. Callahan said that while the building’s primary focus is on youth programming, the church and community center are connected.

“I don’t differentiate between that building and this building,” she said. “All of the things that we do, we make use of all of the space that we have.”

Juanita Watson, 66, has been a member of the church since she was 10. She said the community center and church have served an invaluable role in Poplar since the late 19th century. 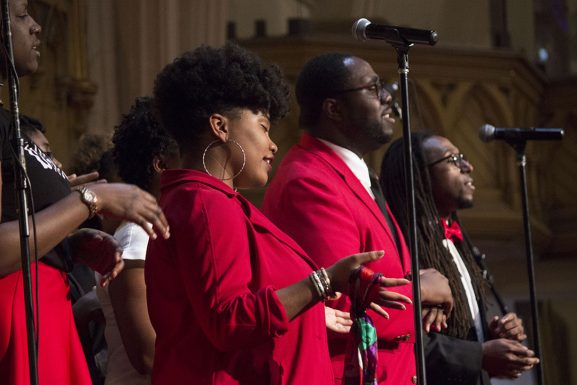 “We have continually given as far as food and clothing to the homeless and poor,” said Watson, who lives near 10th and Girard. “But the main thing is we have a community center … so we have other people coming in and using the facilities.”

René Brown, 55, of Northeast Philadelphia, has been attending St. Paul’s for the past two years. She said the church’s work in the community is occurring “all the time,” and that other members are a key reason why the church has a positive influence.

Brown and numerous church members said the reason the church has a large influence citywide and has continued to thrive for over a century is that the “spirit of God” continues to be in the building. They also noted they have only had five pastors, indicating strong leadership at the church.

Callahan, who is the first female pastor, also serves on the Philadelphia Housing Authority’s board of commissioners. She said that since she became pastor in 2009, development is starting to occur more rapidly in the neighborhood, especially close to St. Paul’s. 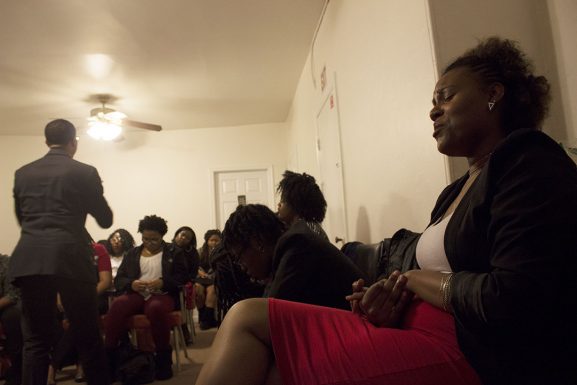 “Pretty much now, every vacant lot in the area is being developed, more and more housing of various sorts,” she said.

Despite the changes, St. Paul’s reach is ultimately a testament to how the church connects with each person individually, Callahan said.

“What attracts people to a particular church is idiosyncratic,” she said. “It feels like a fit, it feels like warmth, it feels like the right word, the right message at the right time of a person’s life. That makes them feel drawn to the community.”

– Text, images and video by Emily Rolen and Steve Bohnel

Ninety thousand. That is the number of people Philabundance served in previous weeks within its nine-county regions in Pennsylvania and New Jersey. Eight hundred of those 90,000 meals are prepared by the students of the [continue reading…]

Since 1984, Philabundance has been operating out of South Philadelphia with one goal in mind: ending hunger in the region. Today, the nonprofit organization serves approximately 90,000 people per week. Glenn Bergman, a former health [continue reading…]

https://vimeo.com/63693271] After receiving a large grant last year from Target as part of a library makeover giveaway, James Russell Lowell Elementary at 450 West Nedro St. was given the support of Philabundance to offer a [continue reading…]