But the history of this city’s Asian immigrant- and Asian-American home is, for residents, what makes it stand out from other stories of gentrification.

Historically, Chinatowns have grown in abandoned urban neighborhoods, unwanted for things other than industrial business. In Philadelphia, this part of town – called Chinatown North/Callowhill – was nicknamed “The Tenderloin” for its reputation as a supposed red-light district.

“Because these neighborhoods were comprised mainly of low-income immigrants, city governments often paid little attention to their needs,” according to a report called “Chinatown Then and Now” from the Asian American Legal Defense and Education Fund.

But like any other part of a large metropolitan city, Philadelphia experienced its urban renewal throughout the 20th century. The Convention Center, sports arenas, casinos, major highways and high-end apartments began to move into this part of town – or at least threatened to.

From 1971 to 1977, the Save Chinatown movement swept across the city, introducing the Philadelphia Chinatown Development Corp., now the neighborhood’s longtime leader. Residents and community activists called the surrounding development the “noose around Chinatown” because it was restricting the neighborhood’s growth, according to an article by Mary Yee in Pennsylvania Legacies, the magazine of the Historical Society of Pennsylvania.

From 1982 to 1990, PCDC developed 164 units of affordable housing, and in 1989 City Council passed Chinatown Special District zoning, protecting the scale of the neighborhood and providing for compatible land uses, Yee wrote.

“Countering the stereotype of the passive Asian – ‘keep a low profile’ and ‘don’t make trouble’ – the Save Chinatown movement represented the time that we broke the mold, overcoming feelings of inferiority and speaking out,” she wrote.

As development increased on all sides of Chinatown in the following years, there was only one way to develop: north.

PCDC Executive Director John Chin said that to grow Chinatown, which he noted has always been an economic driver for the city, what’s happening south of the Expressway needs to be replicated on the north side: more Asian- and Asian American-owned retail, restaurants and commercial industry. His main concern for local residents is for affordable housing.

For Carol Wong, a board member of PCDC and president of the Chinatown Learning Center, outside developers pose a big problem.

Many of the new projects and plans at play right now, she said, have little regard for the community at large.

“Now it’s high end,” Wong said in a previous interview, “and everyone wants a piece.”

Current Projects: Development On The Fringe

According to the city’s Planning Commission, the Central District has seen more than $300 million in hotel development since 2008, and more than $500 million in recently completed cultural projects. And, the neighborhood’s population has grown dramatically in the past few decades.

The biggest development projects include the Eastern Tower Project, the Rail Park and the newest deal, the 8th and Vine project.

The Eastern Tower has been in the works since 2008, when the city acquired the land at 10th and Vine from the state. Securing funding has proven difficult, but the state pledged more than $1 million last fall.

The project was an answer to the neighborhood’s lack of space for their sports teams, a community center for generations of residents. However, most of the housing will be market rate.

Much of the land available here is for private development, said city planner Ian Litwin, who worked on the Central District’s plan for Phila2035. But the lot on 8th and Vine streets was available for public use through city government just a few weeks ago.

Two proposals were competing for operation of the lot: one with the support of PCDC, and one from a developer called Pennrose Properties. Days after Pennrose was selected, Chin was at a loss. PCDC’s proposal included residential and senior housing complexes, a supermarket and an urban farm; it was rejected by the Philadelphia Redevelopment Authority in favor of a 14-story hotel, parking and an Equal Justice Center that will house 300 attorneys.

“We’re very, very disappointed,” he said. “I think our next step is to understand the committee’s decision-making process. Our focus is really about development that benefits the neighborhood directly.”

But Litwin said bringing taller buildings into the area is a good move for attracting more private developers.

“I think that’s going to be very beneficial for the neighborhood, because it’s just a massive sea of parking right now,” he said.

“We’re not necessarily tasked with affordability,” he added of Planning Commission’s role. “We are tangentially, but not directly.” 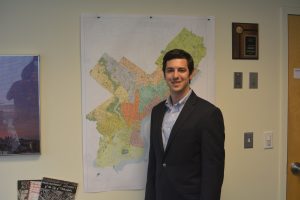 Greg Heller (right), executive director of the city’s Redevelopment Authority, was part of the team that selected Pennrose’s proposal, as the agency owns the land.

Heller said Pennrose’s plan had a stronger design and sense of urbanism, and added the hotel and Equal Justice Center – a hub for 25 public law entities to serve various legal fields – should provide a wealth of jobs for the community and considerable economic benefit.

Most important, Heller said Pennrose’s selection is the beginning of the process.

“One of the things we feel very strongly about is the Pennrose team to continue to do a significant amount of community outreach and engagement, and they respond and continue to refine that plan based on community feedback,” Heller said.

Litwin said the most impactful project moving into the area is the Rail Park, which is well into its first phase. This phase is the only portion of the park that is owned by the city, Litwin added.


In an update from Friends of the Rail Park on March 15, the organization announced construction was on track since they began last October, and things like stairways, hand rails and fresh coats of paint were already underway.

The viaduct sparked debate among neighborhood leaders in Chinatown North/Callowhill. Organizations like the Asian Arts Initiative took a neutral stance, while the PCDC wasn’t as forgiving.

Board member Carol Wong said the Rail Park isn’t a major concern for the neighborhood; however, she wanted to see that money put to use directly back into the Chinatown community.

“We’re trying our best not to lose our identity,” she said.

Callowhill Neighborhood Association President Sarah McEneaney (below), also serves as president of Friends of the Rail Park and has supported the project since its initial stages in 2003.

McEneaney moved into the Callowhill neighborhood in 1979 – fresh out of the Pennsylvania Academy of the Fine Arts, eager for her own space. Since then, she hasn’t left. She still lives in the same apartment, which she now owns and has mostly rebuilt.

It didn’t happen until the 1990s, she said, that the streets began to fill with activity at all parts of the day. Before that, it was desolate after the sun went down. 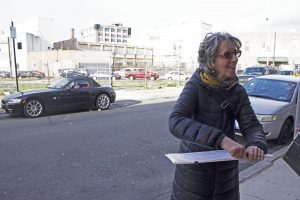 “I think that’s a big question, and it’s also a big opportunity and a challenge, what to do with the empty lots – how to build, what to build,” she said. “The Rail Park, because of the way it threads and goes through the neighborhood, kind of bisects and crosses streets, we end up with some triangular lots that are, in my opinion, really interesting.”

For Litwin, the viaduct is key for this neighborhood to attract private development.

Other future projects include changes on Race Street. According to the Phila2035 plan, the goal for the neighborhood is to connect Chinatown to Franklin Square. This could include building high-rise residential buildings, row homes with gardens, or a space similar to the Piazza in Northern Liberties.

“As long as the development is in line with our plans … we don’t oppose that,” Litwin said.

Philly, Boston and New York remain the only large Chinatowns on the East Coast, none quite like the other.

But according to a report called “Chinatown Then and Now,” by the Asian American Legal Defense and Education Fund, they are all facing similar challenges.

According to AALDEF’s report, Asians made up more than half of the population in all three Chinatowns in the 1990s. By 2010, they made up less than half of all residents, although they remained the majority group in the neighborhood.

The same report finds family households, a historical staple of Chinatown homes, dramatically decreased from 1990 to 2010. Only New York has retained a majority of these multi-generation households.

“In each city, local governments drove areas of accelerated gentrification and have encouraged and assisted the gutting of Chinatowns,” AALDEF wrote. “Government policies have changed these traditionally working class, Asian, family household neighborhoods into communities that are now composed of more affluent, White, and non-family households.”

According to Philly Census data on Chinatown, home-ownership rose by 721 units from 2000 to 2010, the highest rate of ownership versus renting among all three cities.

AALDEF also reported that by 2010, Philly’s Chinatown had become more expensive for both owners and renters as median housing values and rents exceeded the city’s overall average.

Moving forward, it’s yet to be seen what developments will be made in the neighborhood, and by who.

David Kyu, neighborhood project manager at Asian Arts Initiative, believes longtime community members and people who appreciate the culture of the place should have a say in what it becomes.

Kyu did say it’s important to educate community leaders and members on the plights of each group in the neighborhood, like PCDC, Asian Arts Initiative and the Callowhill Neighborhood Association.

Oftentimes these groups don’t see eye to eye – something that Litwin said makes change difficult, but necessary, for the Planning Commission to mediate. In the meantime, he said, private development is going to determine what really happens in this area.

“The area is going to get more expensive because of its location to Center City,” Litwin said. “It’s kind of something we can’t control.”

Historian Kate Wilson, who wrote a book on Philadelphia Chinatown’s history, believes a central issue moving forward is how people – inside and outside of it – view Chinatown. Some, she argued, don’t look at it as a real neighborhood, which can upset the longtime residents trying to keep its culture alive.

“[Residents] want people to recognize that this is a living community, this is a real neighborhood,” Wilson said. “Families live here, they raise children here – it’s not just a place you go to have Chinese food.”

– Text, images and infographics by Emily Rolen and Steve Bohnel

In a neighborhood that’s stood in Philadelphia since the 1870s, the Friendship Gate at 10th and Arch streets seems young by comparison—it was finished and dedicated in January 1984. Chinatown’s symbolic entrance, however, might not [continue reading…]

Francisville: The New ‘It’ Place To Live?

“Francisville is a good model for a mixture of housing types and a mixture of income levels coexisting in the same neighborhood,” said Richard Redding, director of community planning at the Philadelphia City Planning Commission. [continue reading…]

https://vimeo.com/22909418] A cleaning and greening initiative has swept Philadelphia including the small, historic neighborhood of Francisville. Vacant lots in Francisville are disappearing at a surprisingly fast rate thanks in part to Penelope Giles, founder of [continue reading…]