Neighborhood Bike Works’ Summer Camp has grown significantly since its humble beginnings in 1996, now providing both kids and adults practical mechanical skills, development opportunities and the empowerment and ownership of a bicycle.

The nonprofit bike education program, located at 3939 Lancaster Ave., is in a unique location in that it sits at the intersection of several distinct neighborhoods – Mantua, Belmont, Haverford North and Powelton.

We spoke with Meesh Ritondo, the development manager at Neighborhood Bike Works, about the program’s continued growth and enduring mission to, “inspire youth and strengthen Philadelphia communities by providing equitable access to bicycling and bike repair through education, recreation, leadership and career-building opportunities.” 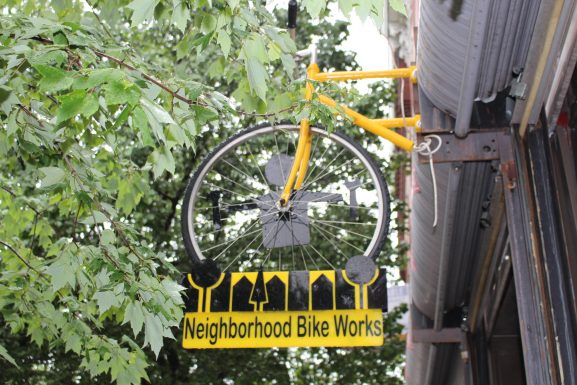 What is the history of Neighborhood Bike Works?

Neighborhood Bike Works is a 20-year old organization. It started very small, with three people just getting a bunch of different parts and bikes together that they could give access to the community. From there, it was kind of DIY bike shop where people would come to learn how to fix their own bike.

When we got more donations and funding, we started running youth programming. We’re taking kids from underserved neighborhoods and giving them access to green spaces, like showing them where they can ride, as well as give them the opportunity to earn a bike. So after they’ve fixed up their bike through participating in the program, they get to take it home. They also get a lock and a helmet and they have all of the tools they need to ride around the city, go to different spaces. The opportunities are, you know, they’re kind of endless for them on the bike.

Is there a new sense of independence for a student who learns and goes through the process to have control of their mobility and be responsible for that mobility?

Given that students are off for the summer, is this the most important time for Neighborhood Bike Works?

Definitely. The Earn-a-Bike program is part of the summer program, as well as Ride Club, so kids will come in and learn some mechanic skills. They will earn their bicycle. They will go for different rides, explore new parts of the city, come back, learn some more things, maybe watch films that are relevant to their city and their surroundings.

Our summer camp fills up fast. When we opened up registration, about three or four weeks ago, I think the program filled within the week. 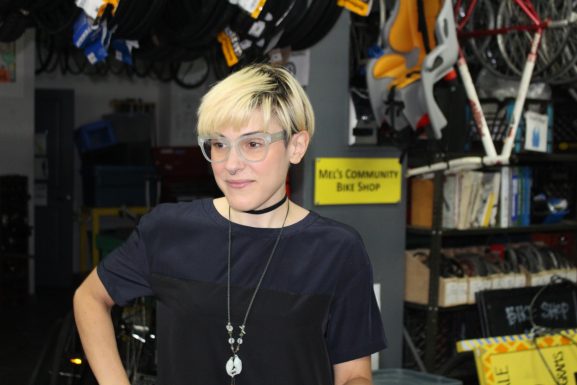 Is there a specific reason why the organization is based in West Philly?

We chose West Philly because we really wanted to be in the heart of the Promise Zone [a federal initiative for areas in poverty to gain resources and supports to end the poverty cycle]. There is a strong sense of community in this part of the city and working with the neighborhood is vital to our platform. This is an area where people traditionally don’t really have access to bikes or the skills and tools to maintain them, so we want to make sure that the people we’re actually trying to reach are able to come here so they’re able to access this place and we’re able to help them a little bit better.

Are there nonprofits in the neighborhood you tend to partner with?

We partner with the Bicycle Coalition of Philadelphia. They are working on this Vision Zero conference to  make the streets a little bit safer so that no one is, you know, dying and getting hurt. 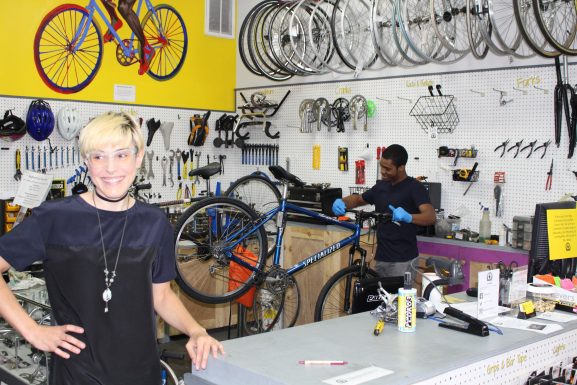 What kind of change have you seen in the neighborhood since being here?

Oh, goodness. West Philly is changing constantly. Gentrification is a strange thing. It can offer positives in the sense of adding resources to a community, and sometimes it moves people out of where they’ve been living for a really long time.

We don’t want to push anybody out. We just want to make sure everybody in the neighborhood currently has access to things everyone else has. People talk about food deserts and the isolation of nutrition in parts of even this city, so we at least want to be able to give people access to transportation.

-Text and images by Jim McCormick and Megan Dorantes.

For many individuals living in the city, biking is more than just exercise or a convenient way around town—it is a lifestyle. Thusly, it is important that there are shops around town that cater accordingly [continue reading…]

There’s no question that Brewerytown has seen numerous changes throughout the years. Once known for its many breweries, it is now recognized for the new establishments in the area — especially the cafes. In a [continue reading…]

“The neighborhood is changing where we’re seeing more people use bikes,” said John Dietterle, about what those in the neighborhood have noticed as of late. The uptick in bicycle usage in Philadelphia in the last [continue reading…]