Behind tinted storefront glass and an intercom-locked door, lies Vipul Patel’s vision: spotless walls and slick flooring, flanked by flat screen displays and colored bleach-white, with a painstakingly grown ivy backdrop behind the front desk. Restore does its best to subvert the stigma and stereotyping around marijuana culture, at least superficially, a move that Patel made specifically for Philadelphia.

Restore Integrated Wellness Center is one of 27 original licensees for dispensing marijuana in Pennsylvania, and as of now the only such location in Philadelphia. Patel, co-owner and chief operating officer of the facility formed his idea three years ago from following friends in the prolific medical marijuana industry on the West Coast and built the practice with several friends on top of years of retail experience. 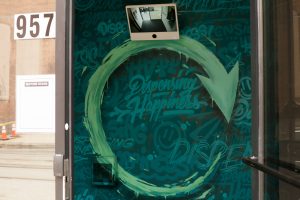 “It wasn’t like I just woke up one morning and said, ‘I want to be in the medical marijuana business’,” Patel said. “After I did some research into the medicine, I realized that this could be a win-win for everybody.”

Patel, who is originally from South Carolina, knew that he wanted to start the venture on the East Coast, specifically Pennsylvania, after they announced the original law’s passage in 2016. While Patel recalls the application process as “fair” and universally open, each round of approved dispensaries (up to an initial cap of 50 statewide) were required to meet heavy restrictions. 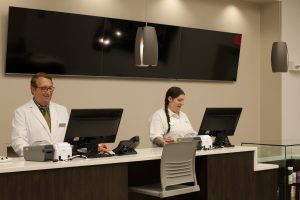 For instance: the 6,000-square-foot dispensary cannot be located within a certain distance of a private school or day-care, and even the packaging process for the product is strictly controlled. With the only other choice being Montgomery County, Patel picked an optimum flow point for all Philadelphia residents: Frankford Avenue in Fishtown, right off Columbus Avenue.

While Philly’s medical marijuana program is only about five months old, some 30,000 patients have legally joined. Patel wants Restore to go beyond just the product and says the name signifies a wholistic approach to wellness through other accoutrements such as vape pens and cartridges, oils, tinctures, sprays, topical ointments and concentrated resins. Service, he says, is key, and Restore has on-site pharmacists and surplus staff members to complement the unique, hospital-like interior. 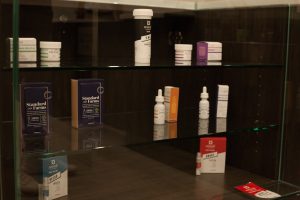 “We don’t want to be like going in a convenience store, picking up a pack of gum and walking out,” Patel said. “We’re here to answer questions, make them feel at ease… we want them to leave knowing exactly what they got and how to use it.”

Though Patel isn’t allowed to discuss specific patient cases, each customer leaves with a piece of a growing form of alternative medicine, one that can be used to treat a myriad of health problems from cancer and HIV/AIDS to mental conditions like PTSD, depression and anxiety, according to inhaleMD.

“It’s inspiring to be able to come in here and see the impact that it makes on patients, and [to be able to] watch the transition from one week to the next and see the improvement,” said Restore Pharmacist John Boyel. “Across the whole age span… patients that can barely move one week, and come in and be virtually pain-free a few weeks later.”

Boyel works with all comers and is seeing results from medical marijuana treatment, such as a 90-year-old terminal cancer victim slowly regaining their appetite, to someone diagnosed with ADHD using the product to ease themselves off prescription drugs.

“I hate to say this, but it’s almost like a swiss army knife of therapy,” Boyel said. 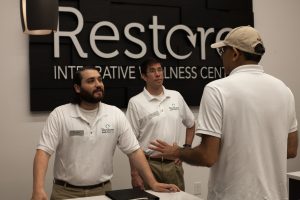 Patel agrees, and aside from a software hiccup on their opening day last Wednesday, the dispensary is operating smoothly, with no hostile pushback from Fishtown residents. The seamless entry, he reckons, comes from how Restore didn’t “sneak in” to the community, making their presence known ahead of time with other local businesses and supplying Philadelphians with tailored combinations of treatment options.

“Usually it’s my job and my staff’s job to thank people when they leave, [but] they were actually thanking and hugging us as they were leaving,” Patel said. “I’ve had a lot of businesses. You don’t get patients hugging you when they leave.”

While it’s not a substitute for perscription drugs, and not a cure-all on its own, medical marijuana as a treatment will grow as more doctors begin to prescribe it, something Patel claims to already be witnessing. Pennsylvania is set to offer the easier to use dry leaf and flower forms of medical marijuana by the end of the summer, for which Patel is making plans to open a second location in Elkins Park.

While not yet concrete, Patel and Restore have come from a vision to an impactful force in a few short years, one that is uniquely Philadelphian.

-Text, images and video by Diana Shalenkova and Jake Gibbons.

Herman Townsville will welcome this summer season with his new ice cream and water ice parlor. Townsville bought the building at the corner of  Stenton and Ogontz this past December and with the help of [continue reading…]

Port Richmond is a close knit community, known for its large Polish and Irish immigrant population. That said, there is plenty of diversity within the borders of the region. This diversity is seen throughout the community [continue reading…]