Odamis Fernandez-Scheinbaum is the assistant principal at Independence Charter School. Fernandez-Scheinbaum, having worked previously as reading specialist and assessment coordinator at the K-8 community-based charter school, has been at ICS for more than 10 years. The school, located at 16th and Lombard streets in Center City, emphasizes second language acquisition and teaching students to become “global citizens,” helping pave the way towards creating healthy learning environments for students of all backgrounds.

Independence Charter School has a very diverse community of students, staff, parents, etc. Can you help paint the picture of the student body and staff, in terms of nationality, whether there’s a small or large percentage of immigrants, any other details you feel are important?

So ICS is a charter school, and the way our lottery works is city-wide. About 27 percent white, 38 percent black, 24 percent latino and small percentages of Asian and multiracial students. In terms of economic disadvantage, our school is a Title I school. Fifty-two percent of our students are considered economically disadvantaged by federal means.

In terms of immigrants, by federal determination, it’s actually a low number of students. From the federal government in terms of schools, the students have to come from another country and be educated less than three years in an American school. So while we have a lot of families that would be considered immigrants, their children might have been born here but are not considered immigrants by the standards of the federal government. However, we do consider them immigrants because by being raised by their families in those households they are in some way or another having to deal with a culture in America that is different than their culture. We have about 10 to 15 percent of students that fit this category. That includes some heritage Spanish speakers, some heritage Indonesian speakers and some Mandarin Chinese speakers as well. 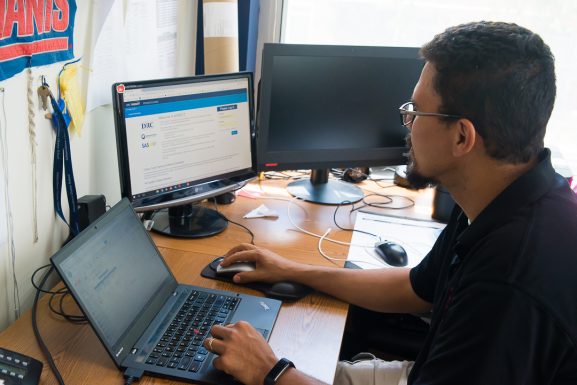 Do you feel that the current political climate has instilled a sense of fear or anxiety in these students, whether for themselves or for their families? If so, how do you go about alleviating that?

I think definitely for the families. We’ve had some families come in and say to us, “it’s been really hard.” They worry about things like sharing certain paperwork in the application process, and whether we would be sharing certain information that the paperwork revealed. Luckily, we have Maestra Neyza [Cabrera Reyes] who is a Spanish speaker and she is able to work directly with those families to alleviate those symptoms. But we’ve also had students who we know that their relatives, sometimes even one of their parents, this year and last year, taken into custody because they’re undocumented.

The way that we support those families sometimes ends up being financial, where the staff raises money, other times food. The biggest support for those students however is making sure their lives here in school are stable and they understand that their routines don’t change here at school, and in addition the school counselor meets with them regularly. Our lower school’s school counselor is bilingual, so she also can reach out to families and support in various ways. In that situation when it was a middle school student last year, she worked with counselor Anne to make sure that family got the support they needed.

ICS emphasized teaching students to be “global citizens.” Can you explain what a global citizen is to ICS and why ICS feels it’s important to teach to students?

So a global citizen, you can go on our website and see but I’m going to give my own definition of it: a student that is really aware of the impact of their own actions and how they impact the community. And by community, part of that is the school community, but also their actions when they’re out in their neighborhood, in greater Philadelphia and eventually out to the entire world.

If a student litters for example, they need to understand how does that impact the rest of the citizens of Philadelphia. Because litter will potentially go into the waste stream that clogs our rivers and streams, which can lead to impacts globally. We have those types of broad discussions with our younger students. With our middle school students, since we’re talking about immigration, we’ll talk about how do policies that were put in place by our president impact the world on a global scale. Our students have marched and taken action, some on their own accord, and made decisions like coming to us, the administration, and saying, “Hey, we wanna march against this.”

Some of our students have put together a march against police brutality, marches against guns in schools, guns in general. These are the types of things that our global citizens, our students, see as an issue they connect to and that they’re able to take action. We empower them with the ability to come up with an issue, something they’re really passionate about, and we figure out within the confines of a school how to take action.

Other examples include our running club last year collecting shoes and sneakers to send to an organization that was donating them to African nations because a big problem is people not having proper footwear to walk on the streets. 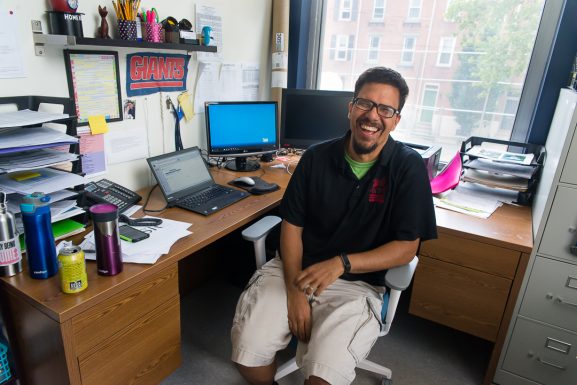 What do you hope to see or continue to see from the School District of Philadelphia, other schools in Philadelphia or across the country, in terms of supporting education among students from all backgrounds? Please share your perspective as assistant principal and as an immigrant yourself.

First off, you’re right, I’m an immigrant. I was born in the Dominican Republic. My family immigrated to New York City because of political reasons. My parents were supportive of a prior administration and then when the new administration got voted in, they felt that they had to leave. At that time, they were pretty easily able to get asylum, which I know is not so easy for a lot of people anymore in the current political climate of America.

I felt very supported later on in life by the New York City education system; when I was younger, not so much. That was before ESL programming was really taking off, things like that. So I think now, knowing what I know and what we know about supporting families, that schools shouldn’t just be thinking about how to make a kid test well, or how to make a student a math student so they can move on into engineering. The idea is to really focus and teach students how we impact each other and how we continue impacting each other beyond these walls. That includes working with the families and making sure the families understand that there’s a different philosophy in education and different change that we need to have.

We have to make immigrants feel welcome in the schools by eliminating different barriers through enrollment. There is some paperwork that you must legally have, but there’s certain paperwork that you don’t. Our state has been really good. A few years ago, we abolished the need to collect social security numbers, they created the PASecureID. No student ever needs to show a social security number now. I do know that some schools still ask for it. ICS, it wasn’t until two years ago that we said, “If the state’s not collecting it, why are we still asking for it?” We didn’t stop people from enrolling if they didn’t have a social security card, but we still asked for it. Now we don’t ask for it because there’s no need for us to have it. This eliminated a barrier for the families to enroll in that school and feel comfortable at that school.

For some Muslim families who come in, these are devout Muslims, some schools have started asking them to remove their coverings so they can see if it’s the parent or not. There’s other ways to check identification to ask of the parent instead of asking the parent to change the cultural belief of that family. Yes, you’re in America and you’re going to have to learn American traditions in some ways and American values in some other ways, but we need to understand that families should still get to keep their cultural values and integrate them however they feel comfortable. That’s something that’s not really happening in Philadelphia schools at all. Even ICS is just beginning to scratch the surface.

-Text and images by Dylan Long.

In the middle of Northeast Philadelphia’s Mayfair neighborhood, the Rodriguez family retains their Colombian heritage by speaking Spanish in the house, listening to Colombian music and cooking traditional Latin American foods like arepas, sancocho soup […]

Asian Americans United was founded in 1985 by a group of people who were college students or young adults in the late 60’s and early 70’s and had been politicized to Asian American politics. This […]

https://vimeo.com/76660608] Philadelphia’s newest charter high school is revolutionizing the way in which young minds learn. The String Theory School, located at the former GlaxoSmithKline building at 16th and Vine, offers its students a top tier […]