Working at a brand new school and building a new curriculum, Gaines, the principal of the Poplar campus of The City School, described his job as “building the plane while flying it.”

This semester, the private Christian institution The City School launched its Poplar branch for sixth to 12th grade students at 910 N. Sixth St. The new facilities provide students with a gym, double the classroom space and an outdoor recreation area — a big step up from the previous facilities where students and teachers fought for space.

The school’s new location consolidates The City School’s former high school and middle school campuses, which operated out of the University City Chinese Christian Church in West Philadelphia and the Tenth Presbyterian Church in Center City. Teachers at those sites packed up their classrooms each day to make room for church activities.

“When you’re teaching kids all day, you’re trying to create an environment, trying to create a culture within your classroom and aesthetics has a lot to do with that,” said Ryan Kellermeyer, director of development at The City School. “When you are using a space that in the evenings is going to be used for some kind of meeting or on the weekends is going to become a Sunday school room, you don’t have much freedom to set that up in a way that expresses your desire for that classroom culture.”

Kellermeyer (below), who also coaches the girl’s volleyball team at Poplar, added that the campus expanded opportunities for students. Previously, they used a YMCA athletic court several blocks from their schools for sports. 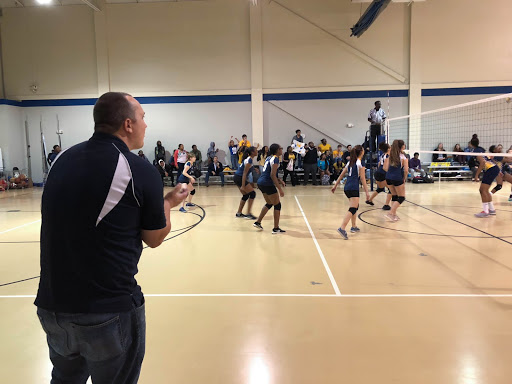 For Gaines, the Poplar campus’ true treasure isn’t the new building itself.

“It isn’t about the shiny and new,” he said. “At the core, it’s the DNA of the people who make the school run well.”

The high school and middle school teachers at Poplar can work together to coordinate lesson plans and discuss strategies to help specific students succeed.

“We’re constantly in collaboration with one another,” Gaines said. “It’s talking and building those relationships.”

“It creates a sense of community because the students get to come together…they get to know each other, build on those relationships,” said Patty Jones Thompson, whose 10th-grade daughter plays on the school’s volleyball team.

Before enrolling at the Poplar campus, Jones Thompson’s daughter attended The City School campus housed at the Tenth Presbyterian Church.

“Their classrooms there were smaller…and even the configuration was challenging,” Jones Thompson said. “Here, even just visually, it’s more of a school setting, more of an opportunity to do different things in the classroom. Not just the traditional setup, but more of an intimate setting.”

The Poplar campus is housed in a residential community, and school administrators hope to connect with the residents and public resources in the neighborhood. Potential future collaborations include providing students with library cards to the Girard branch of the Free Library, working with the community garden at Eighth and Poplar streets and using the school’s cafeteria kitchen to help feed others in the neighborhood. 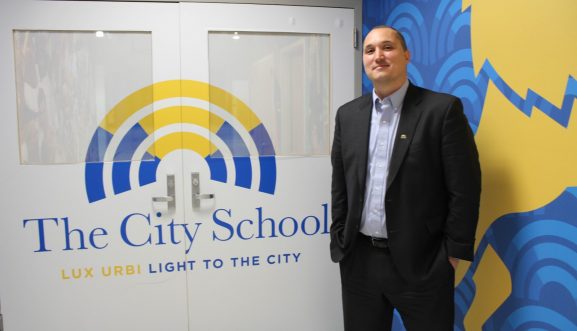 The Poplar campus is the third campus of The City School, which formed in 2014 when Spruce Hill Christian School, City Center Academy and Philadelphia Mennonite High School merged.

The new facilities are part of a five-year, $25 million plan expansion plan.

“Down the road, there’s a vision for the school to really see ourselves as having an elementary campus accessible to every neighborhood in the city,” Kellermeyer said.

He added the Poplar campus, which currently enrolls 149 students, allows The City School’s plan to start becoming a reality.

“At the end of the day, a school is a community of people, they’re coming together to learn or teach,” Kellermeyer said. “Giving that community the right kind of space where it can really flourish, facilities, has a major impact on how a community interacts with itself.”

Alex Shraybman was more than 40-years old and in an established career when he decided to uproot his family from their home in Lviv, Ukraine, and make the trip to the United States in search [continue reading…]