Drawing inspiration from the iconic “A Great Day in Harlem” photo by Art Kane in 1958 that signified unity among jazz musicians, to XXL magazine’s 1998 commemoration photo called “The Greatest Day in Hip Hop History” which symbolized unity among rap artists, one Philly native seeks to do the same for the arts community.

Now coined as the “A Great Day in Philadelphia” photo, Uncool Chuck, brand ambassador of Righteous Rebel Denim and Apparel, and spearhead of the “We Culture” movement, has taken the lead to promote unity amongst Philly’s growing collective of creators.

What is your connection with the arts community in Philadelphia?

I’m immersed in it. Over the past four years I’ve met a lot of people who are artists, stylists, writers, the whole gamut. I have my own brand, Righteous Rebel Denim and Apparel, so from that I’ve met so many people. I’m just a supporter of arts in general. For a while I thought I was weird because I thought a certain way, but once I got out here and saw how many people were like me and thought like me, it was dope.

What aspects of the arts community in Philadelphia draw you in and keep you engaged?

For one, there’s diversity. It’s not like it’s just one community of painters, or one community of models. It’s a huge spectrum of people. So many different people doing so many different things. You can go see an arts show, or you can go see a fashion show, whatever. With some cities, they get pigeonholed in one thing; they only have movies, or they only have music. Here, it’s everything. Whatever you can think of, we got it. 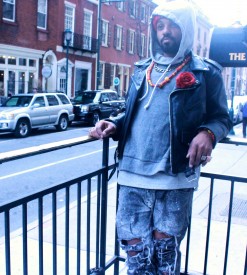 Do you think that people are starting to grasp the fact that Philadelphia is a diverse arts city?

I think the city in general is starting to get more attention, buzz and appreciation. Historically, we’ve always had a lot of art and culture here. But I guess over the past ten years there’s been kind of a shadow on it because not too many people came out here and made it big. Recently there’s been some people that have been doing their thing and trying to shine a light on what we have to offer here. First guy you think of is Meek Mill. He has a traditional Philadelphia style hip-hop sound. Just the fact that he’s from here, people are looking to see who else from here can spit or write good songs.

You coined the “We Culture” movement?

Yeah, if you’re young and into arts you probably saw the Kanye West interview he did where he was talking about how rappers are the new rock stars and how hip-hop is the dominant culture everybody borrows from. That’s where I got the idea from. The way I see it, I feel as though artists in general are the culture that makes things cool. We are the tastemakers and the innovators of it all. We have the power to shape the world. If you look at it globally across cultures, the artists and creators are the ones who shape the culture.

Do you think that it’s a grassroots movement and then gets spread by word of mouth?

Why is this type of movement important in Philadelphia?

Philadelphia sometimes gets the reputation that we don’t stick together or support each other. We convey that mentality that “I’m going to be the only one that’s going to make it,” or “I got to be the king of Philly,” and that’s not necessarily the case. There’s too much talent for that to happen. I look around at all these other cities and they get certain spotlights because they have a collective. They have a bunch of different people that are coming together. I feel like that we can be bigger and better as a city if we’re all unified and moving together.

So you look at it as the “We Culture” streaming multiple mediums?

Any type of art you can think of. Somebody’s doing it and if you have the talent, you’re going to want to be seen. It’s always more effective as a group rather than an individual. Another thing is that you don’t have to think that you’re out here by yourself. You’re not alone and you don’t have to do one thing to be successful. You’re with your peers and friends and you can all help each other achieve success. 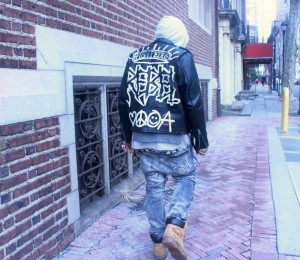 – Text and images by Deneia Washington and Patrick Smith.

El Centro de Oro, the golden center, fosters Latino dance, music and culture in Fairhill, while also bringing light to an abundance of resources available in the community. This has been showcased since 1979 at [Read More]