Absent parents. Incarcerated fathers. Children of violence. For parents and children in underserved parts of the city, the narrative far too often reads the same. Headlines tell of kids losing their lives too soon, a good kid getting caught up with the wrong crowd.

A network of parents in the Hunting Park community thinks it’s time the script changed. All connected through the Lenfest Center at 10th and Pike streets, the five parents profiled below are doing their part to keep kids on the right path.

The presence of a father in the room three weeks ago almost brought Danielle Green (above) to tears.

It was the first time a male parent attended one of the Lenfest Center’s parents committee meetings, which Green heads. Started in September 2014, the group meets Tuesday evenings to plan activities for the children and build a network of adults facing similar issues in their Hunting Park community.

“It’s a very good start to leading our children and minorities to be better role models and to not just be labeled kids of violence,” said Green, who has lived in the neighborhood her whole life. “They see violence in the streets, violence in school, violence on TV. They shouldn’t have to turn to the streets as their comfort zone.”

The 36-year-old single mother to Shakir Calderon, 15, and Kir Scott, 8, said each week new faces join the circle of parents. Their voices are being heard.

“Over these last couple of months, everything we laid out on the table came full circle the other night and I was so amazed,” she said, referring to information from NorthEast Treatment Center (NET) and Congresso. Representatives from those organizations attended a recent meeting of about 15 parents to share the resources they provide, whether it is help with behavioral problems or utility bills. 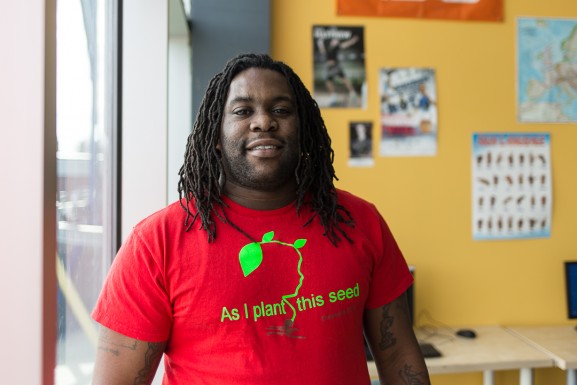 A seed planted in Ryan Harris in 2012 has grown into one hell of a blossoming network.

Harris, 28, was born and raised around the corner from where the Lenfest Center now stands. He recalls being taken on a field trip to Cheyney University when he was in the second grade. It was the first time he realized there were educational opportunities beyond high school.

“That teacher inspired me to go to college,” he said. “He planted that seed in me and I didn’t even know it.”

That doe-eyed second grader would go on to graduate from Cheyney in 2011 with a mission to take the knowledge he learned back to his Hunting Park community. “What good is it if someone planted the seed in me and I didn’t plant the seed in someone else in the community I was raised in?”

Harris created the nonprofit As I Plant This Seed in 2012, which gets kids motivated for school and looking at different paths they can take their lives. Eighty-six book bags packed with school supplies were distributed to kids in the neighborhood at the organization’s kick-off event.

“We can change the mindsets of these children to know that there’s something better than what they see in this 8-block radius,” said the father of 7-year-old twins Ryan Jr. and Lyric.

Harris has a new project expected to sprout up in March called Talk to Me. The program is targeted at preteens and teens to offer them an outlet other than their parents who they can feel comfortable reaching out to.

“We’re trying to bridge that gap between the old values and the ‘new age kids,’ so we can bring in those old principles, values and morals back into the community and all march to the same beat,” said Harris. “They’re yearning for a program like this.” 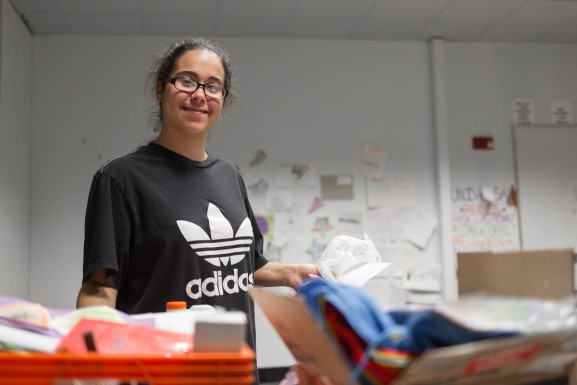 Vanessa Arana is all heart.

The mom to Myhria Coates, 10, and Tatianna Johnson, 8, recently picked some up — of the foam variety — in preparation for a Valentine’s arts and crafts session with some Lenfest kids. And those pipe cleaners? They’re on the way.

The arts and crafts program for kids in kindergarten through third grade was about to be dismantled when the teacher previously in charge was leaving. That’s when Arana stepped up with some other parents to keep the weekly hour-long program running. They’re currently working on decorations for the center’s parent-child Valentine’s dance.

Arana also attends the weekly parents committee meetings and said she remembers at the very beginning there only being four parents.

“Now every week the circle is growing and we have to get more chairs,” she said. “By the end of this year maybe it will be bigger than we imagined.” 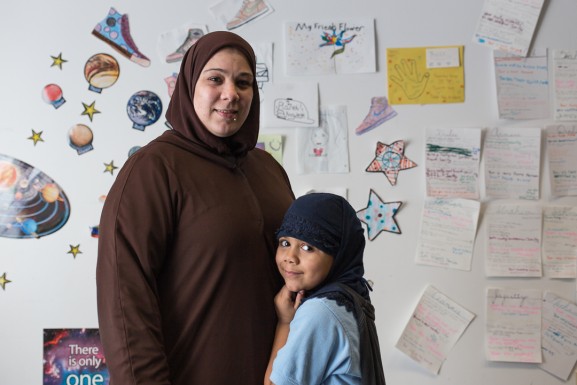 Melissa Pagan is feeling the effects of parental involvement — quite literally. “My abs is burning.”

The parents committee has been focused on expanding the programs for adults at the center. Pagan attended the first free, hour-long women’s exercise boot-camp held last week. She also helps Arana organize the arts and crafts sessions at the center.

“I want to see my kids doing positive things,” said Pagan, who is mother to Evelyn Douglass, 6, and Samyia Davis, 14. Pagan’s eldest daughter had the opportunity to volunteer as a teacher’s assistant at the center. “I just want her to be a positive role model,” she said. “That’s why I get involved myself.” 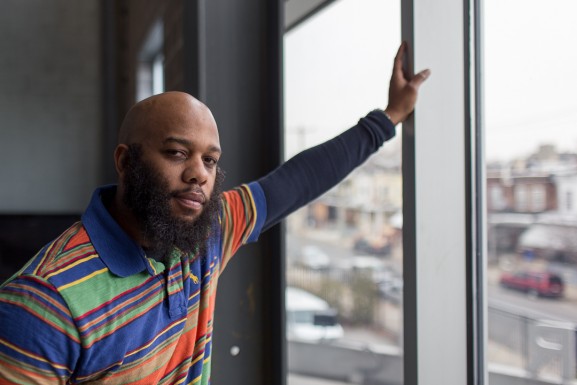 For Tayon Whiting, a personal title goes a long way. He came to the center in 2009 as Tayon Whiting, but now it’s Mr. Tayon to the staff, parents and children whose faces he greets as the center’s security worker.

“I never thought in life I would be in the position I’m in at this time, having lived the life I lived in the past, having grown up in the streets, having watched friends of mine killed,” said Whiting, who is father to two girls, a boy and a stepson who range in age from 6 months to 11 years old.

His job at the center is a bit like air traffic control, as he makes sure hallways are kept clear, noise is kept under control and doors get opened and closed when they need to be.

“When someone puts the keys to a multimillion-dollar building in your hand and gives you the chance to prove how loyal you are, that’s an amazing feeling,” he said.”My co-workers here are behind me 100 percent and that’s what families are for.”

Whiting said he was recently asked to be block captain on the stretch of Pike Street he grew up on. He doesn’t live there anymore, but said he could still work to keep people informed, pass out flyers and organize meetings if he accepts the position.

“I used to think I wanted to be rich one day, living city to city, doing this and doing that, but as I get older I don’t want that life,” he said. “I changed my vision. I want to be a role model for my neighbors.”

– Text and images by Edward Newton and Cara Stefchak.

Several City Council members have been working over the past few weeks to come up with a solution to lower crime rates. Earlier this month, Councilman Curtis Jones, Jr. along with Councilmembers Maria Quinones-Sanchez, Wilson [continue reading…]