The mayoral election may be over but the staff at the Committee of Seventy says that increasing voter turnout is not a seasonal mission to them.

Founded in 1904, the Committee of Seventy has been pushing to help make Philadelphia’s government responsive to its citizens’ needs and making government operations more transparent.

Because technology has advanced since 1904, the Committee of Seventy relies on their website to connect to constituents. They offer basic resources like a polling place locator, a database of elected officials, contact information for Philadelphia’s political parties and in-depth research publications about current issues and policies in Philadelphia’s political realm.  The ones compiling those research publications are the Committee of Seventy’s Public Policy interns and Seventy’s senior policy analyst, Patrick Christmas.

The Public Policy interns have hailed from all of Philadelphia’s major colleges, such as Temple University, Drexel University, University of Pennsylvania and Villanova University. Christmas did not get his start with Seventy in college like his interns. He was in high school, serving as a teacher.

Before Christmas found his place at Seventy, he spent his time at Fels High School in Northeast Philadelphia as a teacher, a position that has prepared him for his work at Seventy. Christmas studied at the University of Pennsylvania’s Fels Institute of Government and then made the transition from science teacher to working with Seventy. 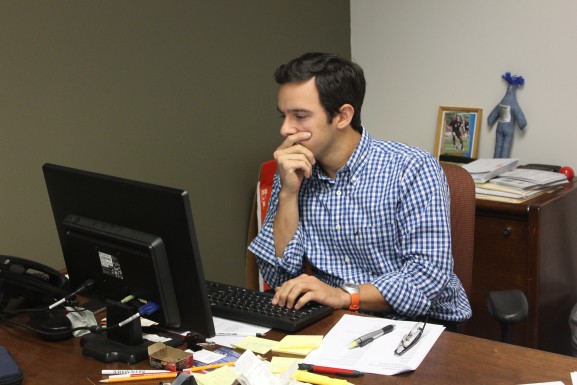 “One of the major obstacles in front of our schools is that our political system just doesn’t do well to seek solutions and find common ground,” he said. “That’s how I kind of had a little bit of strange pivot from being a high school classroom teacher to working at a non-partisan, better-government organization.”

In fact, his experience as a teacher has served him well. Since he is in charge of overseeing the Public Policy interns, he oversees the research projects they produce, which end up on the Committee of Seventy website. Despite having read many a high school paper, Christmas warns that the research the Public Policy interns do differs the from the typical high school Google-based research paper.

“When you’re at a college or university and you’re writing a paper, it’s probably most important to make sure you have sources and they’re in the proper format,” he said. “You don’t have to be that discriminate about what you’re sources are. Here, every last source matters tremendously.”

Seventy’s The Works Series publications have questioned TV political ads, marijuana legalization, minimum wage and much more. The series aims to conquer Philadelphia’s current issues that news outlets are covering but with a scholarly twist.

The series is done in question and answer format and serves as a compilation of reliable sources for the topic so the people of Philadelphia can use Seventy’s website to educate themselves.

“It’s not just finding some website that has information,” Christmas said, “but looking at their board, looking at their funding and especially, since all of our materials have to be nonpartisan, vetting the sources.”

Most recently, the Public Policy interns worked on a smaller research project where they dissected the three ballot questions voters faced at the polls. These questions pertained to LGBT affairs, creating a new Department of Planning and Development and whether or not Philadelphia should borrow money to fund public works departments.

For the LGBT question, one of the Public Policy interns had to take the question about if Philadelphia should create an office for LGBT affairs and tell readers what the purpose would be.

“We needed a quick turnaround from this intern,” Christmas said. “We needed to know what other cities had these types of offices, which ones are permanent, which ones are ordered by the mayor and is there any information on their costs.”

Research publications like the piece on ballot questions are the majority of Seventy’s website, but their pavement pounding efforts are right at the polls with high school students as the leaders. 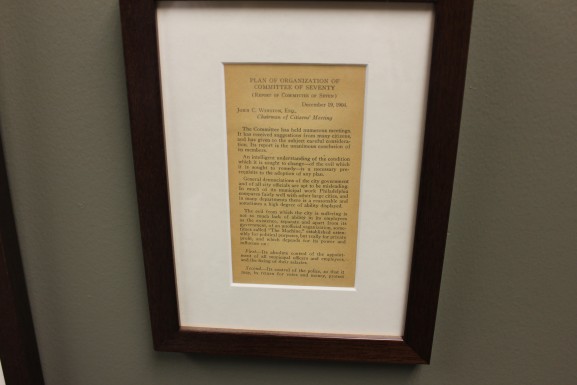 This effort is Seventy’s Election Ambassador Program, which is another way Seventy is trying to educate constituents and get people to the polls. The program is completely run by Philadelphia high school students with the guidance of Christmas and the Election Ambassador Coordinator, Walker Moseley. They had their trial run this past May during the mayoral primary.

The program now has an official name now, but Christmas said Seventy has a history of sending high school students out to help at the polls.

“We’ve come across old literature, like framed papers back in the closet, that describe a similar program back in the ‘40s,” he said. “There were 300 high school students out and about in the ‘40s doing a similar role to today for similar reasons.”

“The young folks are not voting,” he said. “So, I try to highlight the fact that is important and that this discrepancy is going to serve as a disservice to them because they’re not really advocating about what they think is best for the future.”

Seventy’s efforts to get people to the polls and to become more educated about the voting process – whether that be with intern-created research databases or the Election Ambassador Program – have been going on for years. As they create more resources for Philadelphia’s constituents, they are defending their mission, which is, “To keep watch and ward over the public interests.”

The Next Mayor: Five Questions the Candidates Should Face

The remaining Philadelphia mayoral candidates are going to be hard pressed with tough questions from voters this election. With the systematic issues Philadelphia faces in areas like education and government accountability to the public, the two [continue reading…]

As this unpredictable election season enters its final week, tax reform is easily overshadowed by the new scandal of the day. But without taxes, the government wouldn’t have the money to build a border wall [continue reading…]