Philip Green is the co-director of the North 5th Street Revitalization Project, alongside Stephanie Michel (below). The mission of this organization is to keep the streets clean and safe, support the merchants with business services, and bring activities to the community. They use a grassroots approach in order to grow and maintain close relationships with merchants and residents in the community.

Coming from Portland, Oregon, Green has been serving the North 5th Street community since 2011. After one year of volunteering with the organization through AmeriCorps, he accepted the position to be co-director and corridor development manager. 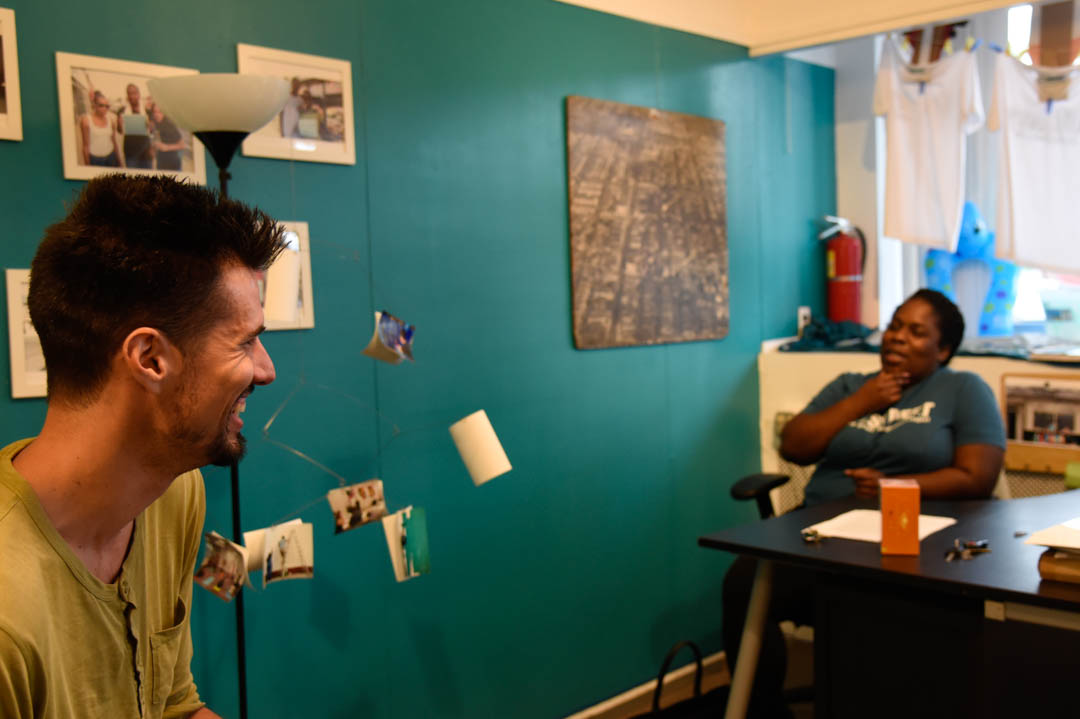 How does the community feel about “outsiders” coming in to help? Is there any backlash?

Not really. I’ve seen that happen in other communities. People can definitely be rightfully [aggrieved] by outsiders in the neighborhood coming in. All of the work that we do is informed by the community. We’ve held several community meetings where we’ve asked the community: What do you see in the neighborhood? What [are] its strengths? Its weaknesses? And that basically gives us a giant to-do list of items that people want to see. We also do an annual survey of the shoppers, as well as an annual survey of the merchants to kind of keep our finger on the pulse of what they want.

How would you describe your relationship with the community and the merchants?

We have 340 active businesses – that’s a lot of businesses. So we aren’t on first-name basis with all the businesses. Also, some businesses tend to come and go really fast before we really get a chance to meet them. I would say we work really closely with 30 businesses on the corridor, as in we’ve helped them get a grant in the past, we’ve helped them put together an application, we’ve done a workshop with them, we’ve hosted a meeting at their location. Then I would say the other 50 percent of the businesses know us, recognize us, but they haven’t necessarily taken advantage of our services. We clean up the sidewalks regardless. 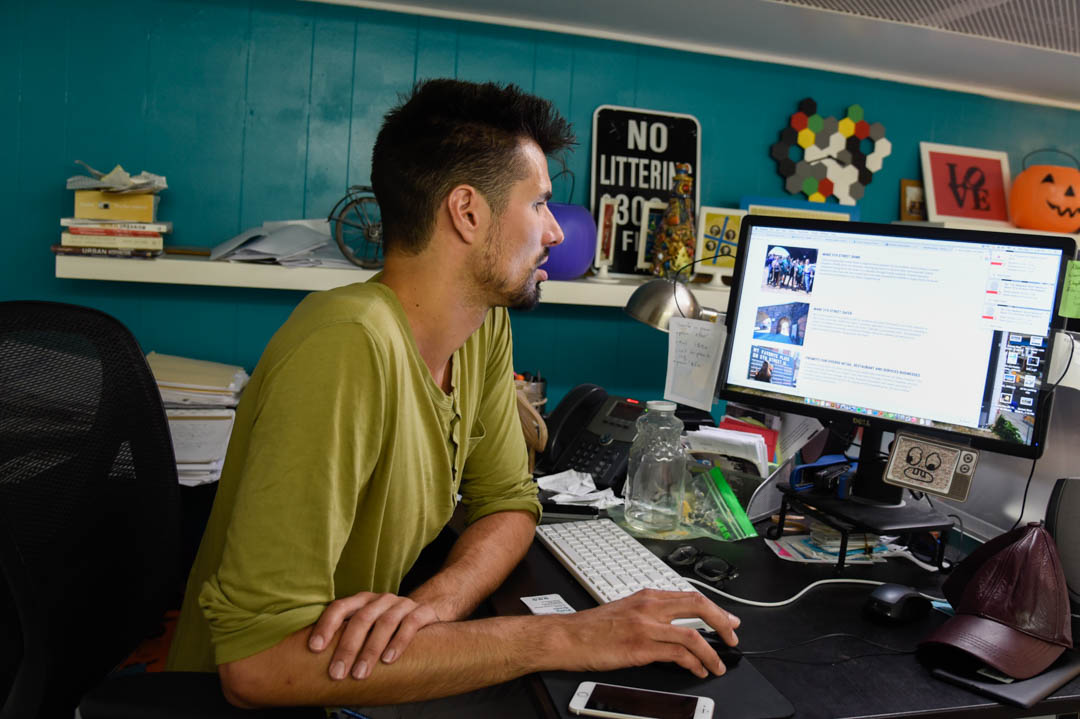 Considering that you are restoring this community, how do you feel about the gentrification going on in the rest of the city?

As the neighborhoods get safer and cleaner, they want as many of the original residents to reap those benefits. But we live in an economy based on capitalism. There’s no way that a community effort can take on demand for housing in a hip neighborhood; we’re just no match.

Where do you see this organization going long-term?

It’s our intent to be here for the long haul. You know, funding (from the Philadelphia Commerce Department) is always fragile. The idea is to build ourselves up into a self-sustained organization that the neighborhood itself will sustain, so that we no longer rely on tenuous government grants that could disappear at the stroke of a pen. 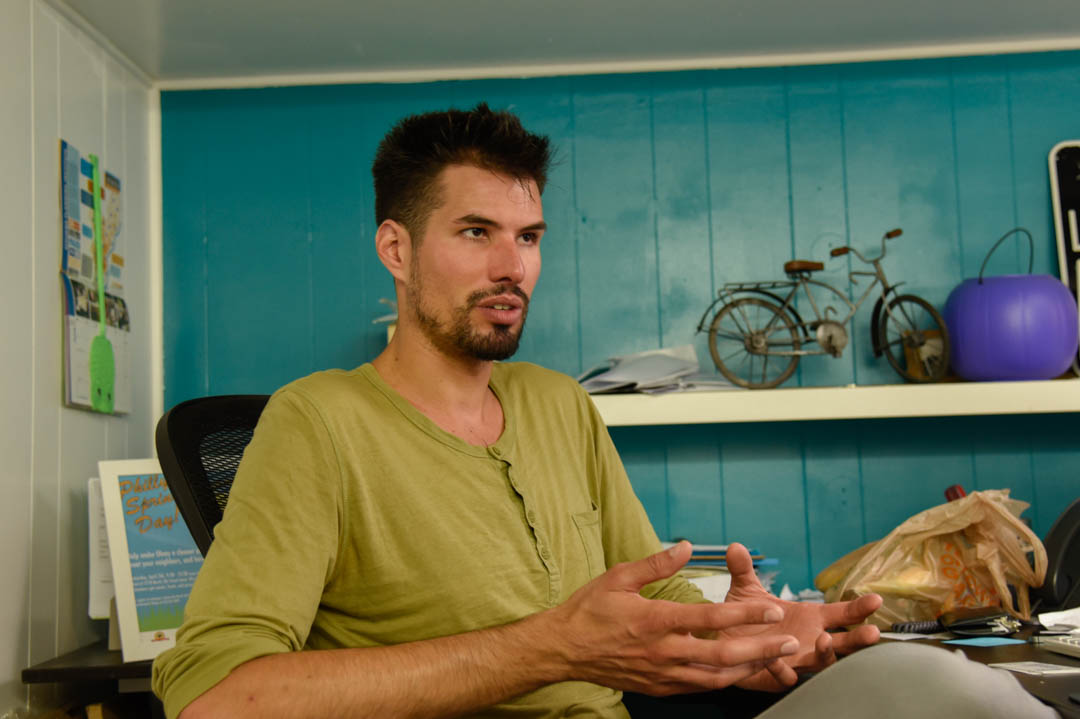 Do you think the North 5th Street Revitalization Project will grow past Olney?

Perhaps. I mean there are some powerhouse CDCs (community development corporations) that have expanded gradually. It typically takes decades and decades for a CDC to grow beyond a corridor, a neighborhood, to two neighborhoods. Again, that depends on funding, being at the right place at the right time, talent and your leadership, whatever that might be. Right now we’re just focused on North 5th Street because it’s 340 businesses and it’s a lot going on. I know that there’s interest and need for the services we provide in the surrounding areas. We’re just not at any sort of capacity to take on a different neighborhood beyond North 5th Street and Olney.

– Text and images by Phylandra McFaddin and Ramona Roberts

Drive up one of Philadelphia’s most historic main streets and you will see longtime residents walking amongst new and vibrant residents, flashes of a city heading for the future. Stephanie Michel’s job begins at the meeting [Read More]

Salsa rhythms pulsate beyond the basement of Esperanza College and flow into the streets of Hunting Park. The Caribbean-based beats resonate from Artístas y Músicos Latino Americanos (AMLA), a non-profit arts and artist’s organization established in [Read More]

Ambrose Liu, founder and project director of the Olney Culture Lab, an initiative sponsored by CultureWorks Greater Philadelphia, has been working in the Olney neighborhood for the past seven years organizing arts and culture events for [Read More]