The world can be a dangerous place.

According to the Bureau of Justice Statistics, domestic violence cases made up nearly 21 percent of violent victimization nationwide from 2003 to 2012. Acknowledging that danger can strike anywhere at any moment, organizations have shifted their focus toward how to combat or avoid a bad situation before it actually happens.

Brian Rago, the head instructor and owner of Gracie Academy in Philadelphia, teaches Brazilian Jiu Jitsu to men and women of all ages. He wants people to be as prepared as possible in the event they find themselves in a dangerous situation.

The Gracie Academy holds free self-defense classes the first Saturday of every month for women who are interested in learning techniques to better protect themselves.

“We have this course for women to give women, who, otherwise, aren’t interested in combat sports, a chance to try it and to learn from a female instructor to make them most comfortable,” Rago said. 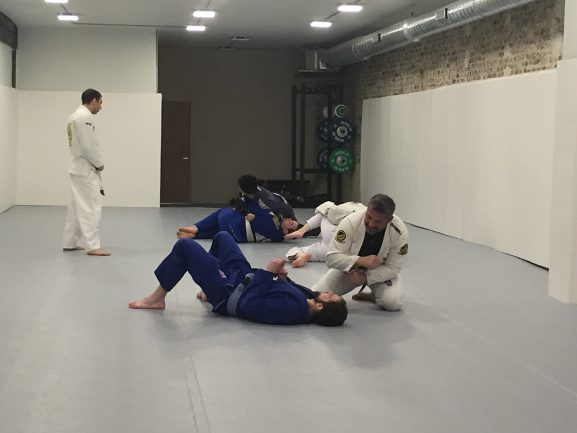 When it comes to who is taking martial arts classes, women are in the minority. However, that number is growing. The Rape, Abuse, and Incest National Network (RAINN) reports that about 90 percent of all adult rape victims are female.

“Women tend to be smaller than men,” said Rago. “And even if not, predators always pick on someone smaller or someone they think is weaker.”

Rago and his instructors emphasize — beginning in the first class — that self-defense is different from fighting.

“First, we try to get across what self-defense is,” said Samantha Faulhaber (below).

Faulhaber is the head kids instructor at the Gracie Academy and also teaches women’s self-defense classes.

“It is not fighting,” she said. “The goal is not to win the fight. It’s to get out of a bad situation with as little damage to you as possible.”

Physical techniques may be useful tools to combating domestic violence, but Women in Transition program director Irene Lindsay Brantley points out that there are other ways to avoid an attack. 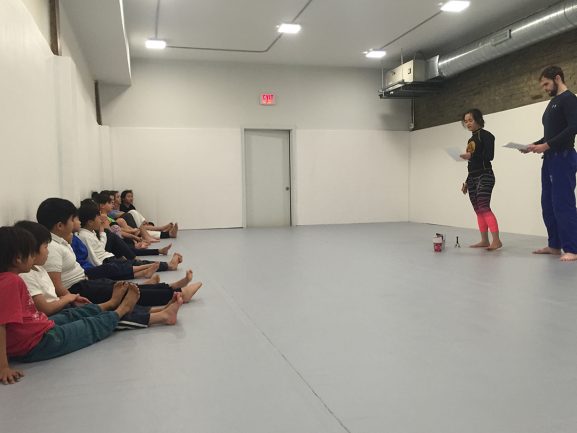 “We talk about safety planning,” Brantley said. “Think ahead. Think about what you already know about yourself and about your situation.”

Women in Transition is a service organization that provides counseling services to battered women to help empower them and help them get out of abusive relationships. The organization has served the Philadelphia area since 1971. Staff members support women in any way they can and utilize a system they call the empowerment model.

“It’s sort of like the analogy of the bus,” Brantley said. “The bus is her life. She’s driving it. We get on the bus and we get off when we’ve finished our support with her and she continues on the bus.”

Brantley refers to victims of abuse as survivors and recalls times when she has seen survivors of abuse with burn marks behind their ears, elbows, knees and even along their hairlines. However, abuse can come in many forms. In addition to being physical, it can be emotional and / or sexual, and take other forms too. One thing that Brantley and her team admit is that they’re not sure if domestic violence cases are increasing over time, but they do think people are talking about it more.

“I think people are reporting more,” said Brantley. “Years ago, it just wasn’t talked about. People didn’t know what to say.”

Women in Transition doesn’t encourage women to use violence or physical techniques to combat danger. Instead, they tell women to use the power of their voice and be aware of their surroundings.

“Understand that we have the right to set boundaries with our bodies and with our physical space,” said Brantley. “We have the right to do that. ‘No’ is a complete sentence. We don’t have to explain that. I just don’t think that we can tell women that you can use that [self-defense] in an abusive relationship and be safe.”

Don’t choose to pick a fight if it doesn’t have to end up in a fight. The National Institute of Justice found that almost 90 percent of college women who were sexually assaulted knew their attacker. 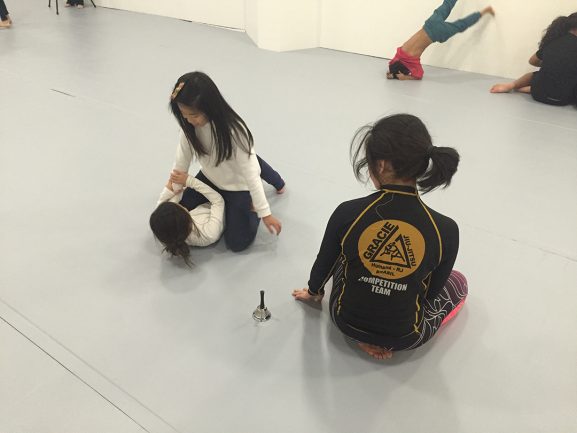 Women in Transition has a program known as WAVE, which provides self-defense training to women and others. Corinne Lagermasini is the prevention director at Women in Transition and has been a WAVE self-defense instructor since the 1990s. She echoes Brantley’s point of only having to fight back if it’s absolutely necessary, but teaches others some physical techniques and moves that may help in any instance.

While Women in Transition doesn’t encourage women to fight their attackers, but instead utilizes other techniques to combat violence. The Gracie Academy agrees with that approach.

“Up until the point somebody grabs onto you, we still advocate to run away, be aware of your surroundings, yell, and get attention,” said Faulhaber.

Overall, there are many different ways and methods to combat domestic violence and dangerous situations. Whether it’s a self-defense class or recognizing a bad situation and avoiding it, Philadelphia offers a number of ways to help keep women, men and children safer. It’s tough for an assault to happen if people learn the ways to stay ahead of it.

– Text, images, and video by Christopher Abruzzo and Matt Scull.

She came home with bruises running up and down her arms. Her mother told her to just try to make the bullies her friends, and the school told her not to fight back. That’s when [continue reading…]

The Friday evening kickboxing class at Joe Hand Gym does more than get young girls exercising. It builds them up from the inside out. Last summer, Erin Fennell and Brittani Warner started a kickboxing and [continue reading…]

The Philadelphia Police’s 39th District hosted a neighborhood meeting Monday night to discuss safety and security due to a recent string of robberies in the district, which includes part of East Falls. About fifteen citizens [continue reading…]