As waves of immigrants from European countries poured into a crowded Philadelphia, the Octavia Hill Association (OHA) was founded in 1896 to help them find housing. Now, 122 years later, OHA is still around and still manages some of the same properties.

In 19th century London, England, Octavia Hill — displeased with her city’s housing situation — began renovating homes and renting them for affordable prices. A group of socially conscious women mirrored Hill’s efforts in Philadelphia, forming OHA when about 25 percent of the city’s population was foreign-born.

OHA’s first properties were in Southwark, said Anne Krulikowski, a history professor at West Chester University. By 1929, the organization managed 450 units and expanded to neighborhoods such as Germantown and Kensington. 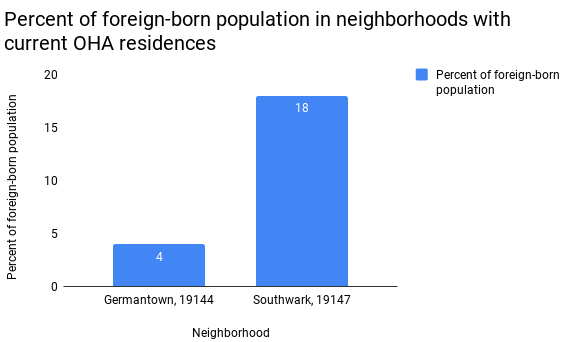 Krulikowski said, despite OHA’s best efforts, immigrants’ housing in the 19th and 20th centuries was still usually crowded, leading to hygiene issues. When parents left to work demanding labor jobs, children were often left alone or in charge of their younger relatives.

Eileen Wirth, the president and CEO of OHA, said it is still committed to offering residences at a lower-market value. For example, the starting price for a junior one bedroom in OHA’s Bel Air apartments in Germantown is $695. The real estate website Trulia sets the median monthly rent in this area at $1,150.

According to the 2012-2016 American Community Survey 5-Year Estimates from the United States Census Bureau, there are now nearly 204,000 foreign-born residents in Philadelphia. This is about 13 percent of the city’s population.

Wirth said OHA is still able to offer lower rates because the mortgage of some of the properties is paid off since its maintained them for decades.

In addition to offering affordable housing, OHA has a history of addressing residents’ other social issues. It partnered with the Women’s Community Revitalization Project to offer the Family Resource Center at the Bancroft Court apartments it built in North Philadelphia. Today, Wirth said OHA works with social service organizations, like Families in Transition, to support residents.

“I’m excited that we’re still here, we’re still housing people and hopefully we’ll continue to do so for many years into the future,” Wirth added. “The need for affordable housing is certainly not going away, and if anything, there’s more of a need now than there was 120 years ago.”

– Text and illustration by Grace Shallow.

Eugene Desyatnik is the president of the Bella Vista Neighbors Association. Desyatnik, a naturalized citizen hailing from the former Soviet Union, has lived in Center City for more than 12 years, recently moving to Bella [continue reading…]

https://vimeo.com/41317453] Residents of the 4000 block of North Darien Street are like a family. Whether it’s giving the kids a safe place to play after school or forcing thugs and drug dealers off the block, [continue reading…]

Drexel University is building Chestnut Square for the fall semester and breaking ground on another unnamed project expected to open in fall 2015. Drexel has teamed with American Campus Communities to complete this task and officials said they hope to immediately [continue reading…]