Each spring, brooms, rakes and buckets of paint come alive as the neighborhoods across the city participate in citywide cleanup days.

But what about the rest of the year?

“I’m hoping that the seeds were planted where we can do this year-round,” Smith said. “If everyone just did their own individual properties, it’ll go like today went where it’s not that long or hard of a task because people are doing what they need to do throughout the year.”

This day’s effort began at the West Oak Lane Senior Center before participants headed out to a number of locations, including Ogontz Avenue, Simons Recreation Center and a lot at the corner of Stenton and Mansfield avenues. 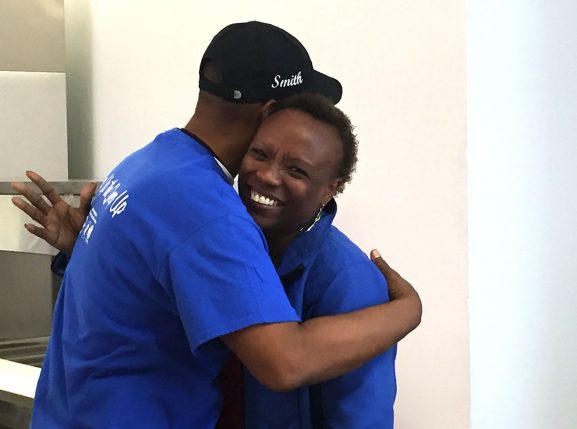 By having cleanups more often, Williams believes volunteers could then be dispersed to take care of more sites instead of needing 20 to 25 people at one location and therefore covering more ground. In addition, he noted, there would be less to do at the traditional annual cleanup.

“This is what we try to do every year with the cleanup and everything to just get the people from the neighborhood to take some pride into their neighborhood and clean up some of the areas that they use,” Williams said.

Simons Recreation Center serves as one of the locations used by the Ed Snider Youth Hockey Foundation. With the death of Philadelphia Flyers founder and chairman Ed Snider, young members of the Snider Hockey team and their parents honored him by applying a fresh coat of paint right outside their rink.

According to Snider Hockey father Charles Seawright, the parents were all sent an email encouraging parents and children alike to lend a hand.

“It’s very important to help clean up because [picking up] trash and painting is always needed to be done,” Seawright said. 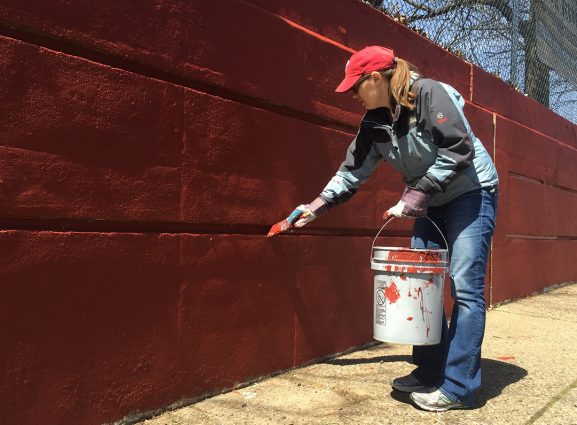 West Oak Lane resident Robert Wing was delighted to see that younger kids – like the hockey players – volunteered and picked up a paint brush.

“It’s rewarding because it not only takes care of the area that the people are living in, but it also, like with the young people that are coming out, it teaches them how to take care of the area where they live,” Wing said, “and the more you train them up the way that they should go, they do that. So, it’s awesome.”

As the director for the senior center and president of the West Oak Lane Business Association, Sharlene Waller believes days like the city cleanup are extremely important for the neighborhood.

Resident Sherrell Green said days like the cleanup stabilize and rehabilitate the neighborhood.

“I believe the spring cleanup brings people together [and it allows] people who aren’t familiar with West Oak Lane to kind of become acquainted,” Green said, “because it actually is a great section of the city to live in.”

West Oak Lane resident Nowel Reaves (below) has been doing the sweep up for 10 years now and said people shouldn’t just clean up because there is a designated city-wide cleanup day.

“We just need to keep that going, that mentality going,” Reaves said. “If you see something, just pick it up or if you need supplies then just go to [the office of Dwight Evans]. If you don’t know where to get the supplies, you can always talk to them.” 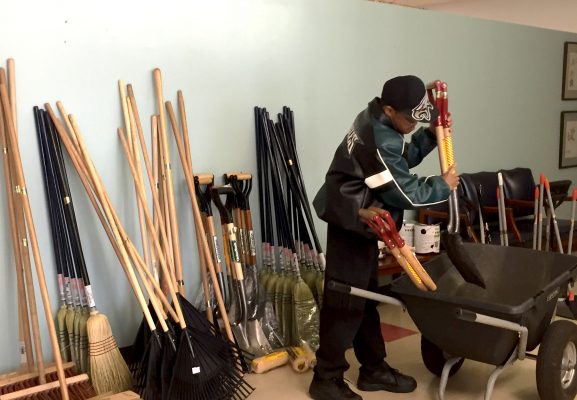 Reginald Ellis was busy doing yard work on a lot at the corner of Stenton and Mansfield avenues, which is across the street from his house. Ellis volunteers in memory of a former neighbor of his who used to maintain the lot.

“She used to do it by herself and then her husband [helped] and she passed away,” Smith said. “So, we try to make sure that we focus our efforts every year in dedication of her.”

The fenced-in green space is filled with trees, flowers, shrubs and grass.

“Her husband still lives in that house across the street and I’ve been talking to him and he’s been like ‘Oh I don’t have any more energy, can you take care of it?’” Jane Takahashi, a member of REACH Philadelphia, said.

Takahashi has high hopes for the continual care of the lot.

“I have a group of students that I teach urban agriculture with,” Takahashi said, “and one of the projects was to try to help this garden, to use it as an organic garden and grow fresh fruits and vegetables.”

Ellis, who considers himself to be environmentally conscious, has been living in the city for roughly 40 years now and has a short list of reasons why cleaning up the city is important for everyone.

Arts & Entertainment: The Next Mayor’s Impact on the Arts Community?

A recent study conducted by the William Penn Foundation reported that nearly 70 percent of the nonprofit arts organizations in the Greater Philadelphia region are considered to be in poor financial health. Philadelphia has, statistically, [continue reading…]

Shanon Skipworth has a saying: “Do not judge me by the color of my skin, the texture of my hair or by the shape I’m in, judge me by what’s inside of me because I [continue reading…]