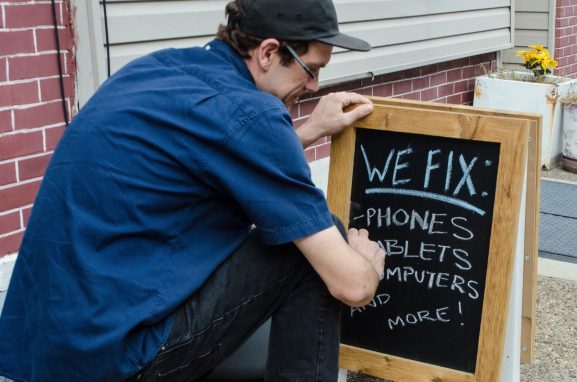 Originally from Ocean City, New Jersey, Kanderson moved to the city 20 years ago. Philadelphia had always been on his radar.

“My dad used to go to Phillies and Eagles games a lot, so we were always up in the city at least once a month for some kind of activity,” he said.

After graduating high school, Kanderson moved across the Ben Franklin Bridge, working mostly at restaurants before graduating from Community College of Philadelphia in 2010 with a business degree. After finding a lack of opportunity in the business world, he jumped into IT and started Philadelphia Tech Repair.

Longtime friend and fellow Ocean City native Teddy Pickering is not surprised Kanderson eventually ended up in IT.

“He has a knack for it and figuring out how to solve problems,” Pickering said. “He always had an interest in electronic equipment.”

Kanderson launched Philadelphia Tech Repair in 2013 but didn’t open the storefront location on Dickinson Street until 2015, a difficult but worthwhile process.

“It’s been positive,” said Kanderson. “Opening wasn’t easy because there’s a lot of stuff that you don’t know about as far as licensing, zoning, tax brackets and stuff like that. It’s gotten easier, but it still has its quirks.” 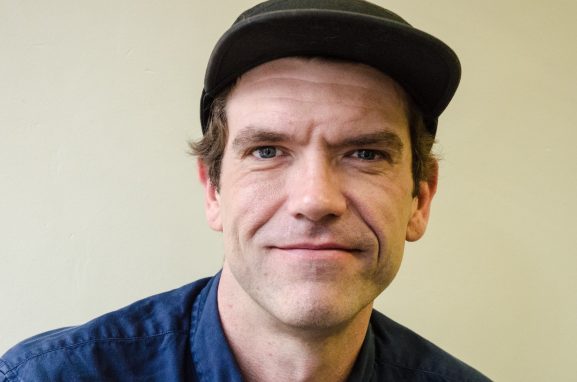 “I think it helped for accounting purposes, managing and marketing,” Joelle Brodhecker said. “It definitely helped him there.”

The quantitative skills, such as accounting, were not the only techniques Kanderson picked up while in higher education.

“It taught me what I needed to know: how to open, the daily rituals and things like that,” said Kanderson. “It doesn’t really apply for what I do day-to-day as far as helping me repair things, but it definitely taught me discipline.” 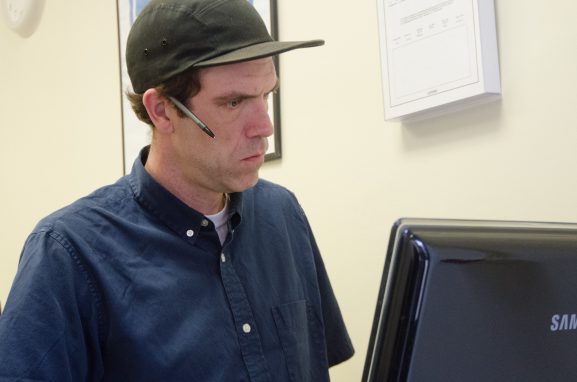 Along with the new-found levels of discipline, planning is another skill that he felt higher education instilled. His time at school helped him learn how to make and follow through on plans, important when starting a business.

That expertise he picked up and refined have been especially important since Kanderson runs Philadelphia Tech Repair by himself. While he does admit at times it can be overwhelming, he believes that having full control can make things easier to manage. 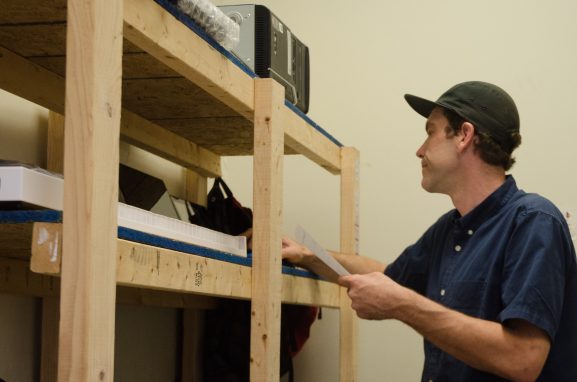 But according to some, Kanderson already possessed what was necessary for the repair industry. Cindi Brodhecker, Joelle Brodhecker’s mother, has known him for about a decade and believes he has always had one trait essential to succeed in the repair business.

“He has a unique talent to research and find answers,” Cindi Brodhecker said. “It is why he is able to work on so many different tech items.”

“He has the tenacity and logical thinking to break problems down until he understands them,” Pickering said. “Then he does the research until he realizes a solution.” 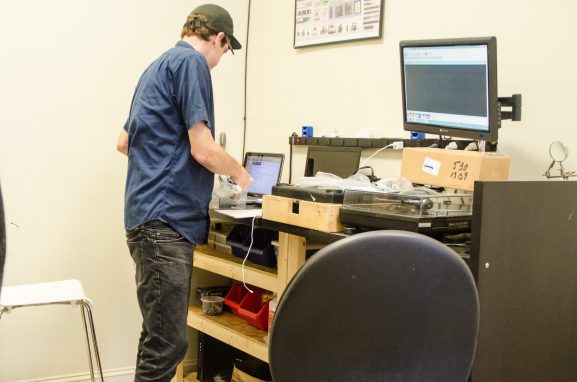 Since the opening of the retail location, the business has shifted away from being primarily service calls to more about walk-in service. Now, quick cell phone and laptop screen repairs have become the bulk of the business. It takes an average of 30 minutes for cell phone repairs, though for an iPhone it takes closer to 20 minutes.

Kanderson’s future aspirations for Philadelphia Tech Repair involve expanding to a larger location and hiring a few employees to help out with orders.

He has been running the store for a few years and still finds enjoyment in his work. Whether it’s the idea of saving customers from having to replace their items, saving irreplaceable pictures or seeing a customer’s face light up after they get their device fixed, Kanderson still finds a sense of accomplishment when he repairs items for people.

“I do feel accomplished and happy when someone gets their things repaired,” said Kanderson.

It’s not unusual to walk through Whitman and encounter some type of structure that is either a vacant lot, abandoned property or building under construction. On the corner of Oregon  Avenue and Swanson Street  lies […]

The calendar reads September, and for several recreation workers in South Philly, vacation has finally arrived. The summer camps have been completed and the next wave of children is still a few weeks away. As […]

South Philadelphia: Bowling Alley and Nonprofit Organization Work Together for the Community

Along South Broad Street, there is a six-lane bowling alley tucked away in the basement of a building that is owned by a nonprofit organization. This bowling alley has only been open since 2009 and employs […]